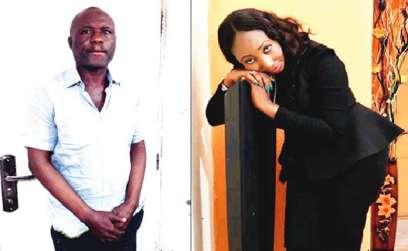 The Lagos State High Court on Friday found Lekan Shonde guilty of the murder of his wife, Ronke, and sentenced him to death by hanging.

He was alleged to have locked the corpse and their two children, aged four and six, in the house before Ronke was discovered by a housekeeper, before the matter was later reported to the police.

The marriage was said to have been marred by domestic violence as Shonde had accused the late Ronke of sleeping with one Kayode, the general manager of a publishing company.

Delivering the judgment on Friday, Justice Josephine Oyefeso, held that the death penalty meted on the convict was based on Section 223 of the Criminal Law of Lagos State, 2015.

She noted that the court was satisfied that the prosecution had proved its case beyond reasonable doubt in the light of overwhelming evidence against the convict.

The judge added that the defendant was very economical with the truth. She stated that his evidence before the court that he had only slapped his wife when he overheard her on a phone call praising the sexual prowess of a lover, did not match the autopsy report by the pathologist, Dr Shokunle Shoyemi, which revealed old and fresh injuries on the deceased.

She held that bruises on the deceased’s cheek, blood collection in the brain, brain swelling and other multiple injuries could not have been self-inflicted.

The judge was convinced that the prosecution also proved, among the ingredients of murder, that the death of the deceased occurred and the convict was the last person who had physical contact with her.

Justice Oyefeso said, “This is the sentence of the court upon you, that you should be hanged until you are dead. May the Lord have mercy upon you.”

Earlier, before the sentence was passed, the defence counsel pleaded with the judge to temper justice with mercy.

Mr I. B. Mohammed, who held brief for the defence counsel, Chief Robert Clarke, said, “My Lord, we want to plead with the court while administering justice, dispensing same in this case to see a reason to temper justice with mercy.

“The couple has two kids; I know, as a matter of fact that these two children have passed through the worst moment of their lives. I know if these two children had any control in this proceeding, it would be that their father should not be prosecuted at all, but since they could not have that, their wish is that their father should be sentenced on a very liberal term.

“The defendant has no criminal record; he has developed a series of failing health conditions since his detention. This defendant hardly sees very well again, he sees faintly. My Lord, he is hypertensive.”