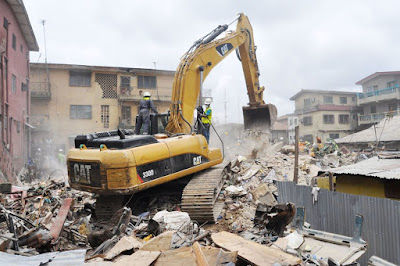 Thirteen structurally defective Lagos Island buildings have been brought down by the Lagos State Government.

This brings the number of demolished buildings to 13 since Friday when the Lagos State Building Control Agency (LASBCA) started the exercise to prevent another disaster after Wednesday’s incident on Massey Street, Ita-Faji, Lagos Island. Twenty people were killed; forty-five others were injured when the four-storey building collapsed. Most of the dead were children.

Commissioner for Physical Planning and Urban Development Prince Rotimi Ogunleye described the exercise as a holistic response to the challenges posed by derelict structures and unapproved schools.

The government, Fakuloju said, has taken over the collapsed Massey Street building.

Mrs Dapo-Thomas said the government will not rest on its oars until “we have sanitise the whole Island and Lagos metropolis of distressed and dilapidated buildings and stem the era of building collapse in the state.”

She said that the fate of sealed 34, Beckley Street will be determined soon.

Ogunleye, in a statement advised landlords and developers, whose structures have been marked for demolition to pull them down or risk forfeiting them.

Commiserating with the bereaved families, he solicited the cooperation of the public to rid the state of distressed buildings.

According to him, the ministry had identified 149 distressed and defective buildings, of which 40 have been demolished.

He said 38 others were slated for demolition before Wednesday’s unfortunate incident.

“In some instances where the owners and occupiers were served with notices and evacuated, people secretly returned to re-occupy the buildings despite the sealing off of the structures by the LASBCA,” he said.

Ogunleye said that LASBCA would step up the ongoing demolition of the affected buildings, adding that all parts of the state would be reached.

He warned that the government will invoke Section 74 of the Urban and Regional Planning and Development Law on forfeiture against any owner or developer whose negligence leads to building collapse.

According to him, seven children and two adults are left in the hospital.

“On Friday, we had 13 patients (10 children and three adults). Four were discharged yesterday (Saturday). We have nine left. We will wait for our consultants tomorrow (today) to determine the fate of others,” Ganikale said.

The Socio-Economic Rights and Accountability Project (SERAP) has urged Lagos and Oyo state governors to to address the human rights impacts of the building collapse in their respective states.

This, SERAP said, is to avoid further damage to the human rights of the people affected.

The organisation urged the two governors to ensure access of victims and their families for effective remedies in a transparent manner, “specifically, access to justice, adequate compensation, reparation, and guarantees that incidents like these can never happen again.”

SERAP, in a statement issued yesterday by its Deputy Director, Kolawole Oluwadare, blamed collapsed building tragedies on weak enforcement of building regulations and oversight by the two states.

It said the twin incidents require urgent action and reforms.

SERAP said its concern for the victims stemmed from the fact that responses so far by the governments of the two states have been insufficient to deal with the massive extent of the human costs of the incidents.

”These incidents come as a tragic reminder of the mismanagement, weakness in the regulatory and monitoring regime. The governments should have done more to prevent them from happening. The governors should act decisively on their commitments to do everything in their powers to prevent more such tragedies, and to bring to justice those responsible, to serve as a deterrent and end the negligence at which many are carrying out their duties.”

The statement read in part: “Schools should be a sanctuary – a place where children can learn, develop and play with their classmates, and prepare for their future lives in society.

“Collapse of school building due to weak enforcement regulations or corruption is an implicit attack on the right of Nigerian children to education, life, and human dignity. Such situation creates an environment of fear and severely diminishes the quality of children’s education.

“The tragedies demand accountability and both Lagos and Oyo states should accept responsibility for these incidents; promptly, thoroughly and impartially investigate exactly how they happened, and publicly apologise to the victims, their families and Nigerians. Building developers and contractors can only be properly held to account if the two states do the right thing for the harm they have caused.”

“SERAP is seriously concerned about the frequency of building collapse in the country.

“Many buildings within Lagos and Oyo states reportedly remain in breach of minimum standards. Both governments should urgently take effective monitoring and enforcement action and provide conclusive evidence that buildings within their states are safe, strong, stable and meet applicable legal and building standards.

The organization urged all levels of government to monitor and effectively enforce compliance by public and private actors with their regulatory and environmental standards in order to prevent other tragedies.

“President Muhammadu Buhari and all the 36 state governors should publicly commit that they will do everything possible to prevent new tragedies like those of Lagos Island and Bode, Ibadan.

“We stand in solidarity with those affected and ready to help by providing free legal advice, assistance and support in order to ensure that justice is not only done, but also seen to be done in these cases”, the organisation stated.