International break: I pray my players don’t get injured – Guardiola 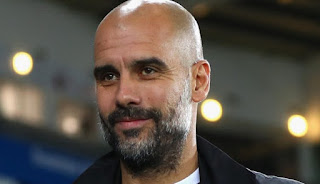 Manchester City manager Pep Guardiola says he is praying his players to return from the international break free from injury.

City remains in the hunt for the quadruple this season but slipped back down to second in the Premier League table following Liverpool’s 2-1 win at Fulham on Super Sunday.

Only a handful of senior players will remain in Manchester during the last international break of the season and Guardiola hopes he will not have to contend with any fresh injury concerns when the others return.

“I pray, pray, that they come back fit,” Guardiola told City’s website.

“They have to go to their national teams, they have to go, enjoy and play for their country, but I hope they can come back fit like they are now.

“Maybe they will go away, score three goals and return with the same rhythm, who knows? I just want them fit and here.

“Sergio, David Silva, Aymeric Laporte and a few others will have a week’s rest. They will have a training programme to do a little bit each day and then a week of normal training ahead of the Fulham game.”

City could face as many as eight games in April but Guardiola is confident his side have the physical and mental strength to maintain their challenge on all fronts.

“With the fixtures, we have in April, we need everybody – it’s crazy,” he said.

“Everybody is going to play and Kevin (De Bruyne), Ferna (Fernandinho), John (Stones), Benjamin (Mendy)… they are all going to be back soon, and we need them.

“Everybody has contributed, and it has been massive. We are demanding more and more, and we have to train hard and then play as well as possible again and again and again.