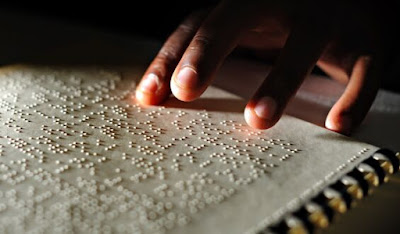 A visually-impaired civil servant, Mr Hamzat Kamarudeen, has protested against the Independent National Electoral Commission’s failure to make Braille reading ballots available for him and other blind persons.

However, Kamarudeen, who is blind, lamented in an interview with one of our correspondents after casting his vote during the governorship and House of Assembly elections at the State Senior Grammar School (Special) on Itolo Street, Surulere, Lagos on Saturday.

Kamarudeen, 54, was assisted to the polling unit by one of his relatives, who helped him to trace his choice and placed his finger in the column.


His relative also assisted him to drop the ballot papers inside the boxes to avoid a mix-up.

Speaking with newsmen after casting his ballot, Kamarudeen said he had to rely solely on the person that guided him, having told him who he wanted to vote for.

He said, “That is how those of us who are visually impaired have been managing. INEC is yet to introduce brail reading ballots so I had to tell somebody to help me out. They put my finger on the card reader and put it where I told them to put it.

“But things can be made better for us like our colleagues in developed countries. They should give us brail reading ballots in the future elections and with that our voting can be secret.”