I got distracted by the whole Ubi Franklin controversy- Iyanya 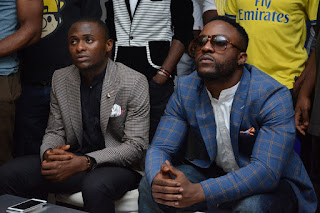 Nigerian singer, Iyanya has declared that he got distracted by the controversy between him and his former record label boss, Ubi Franklin.

It was recalled that the internet has been abuzz with reactions from the interviews granted by Kukere singer, Iyanya, and his former record label boss and friend.

In the interviews, they both traded words, revealing what led to their fallout.

However, in a chat with newsmen, Iyanya revealed that he got blindsided by the whole drama.

“I just want to focus on music. Right now, my major focus is on my new record label, Violet 360. I was actually doing a media tour for the new label before I got blindsided with the whole Ubi story; that was never meant to be the focus. I see it as a distraction. People can think whatever they like; I have no control over that. I just finished recording a song with Duncan Mighty and I would prefer we focus on that. Very soon, I will be putting out an Extended Play album titled, The Rebirth.”

On why he just decided to start a label instead of when he left MMMG some years ago, Iyanya said, “Don’t worry, I’m going to tell my story soon, probably in a book or TV series; that way, I can make money off it. People have been asking me a lot of questions about that but I will like to keep mum for now.”