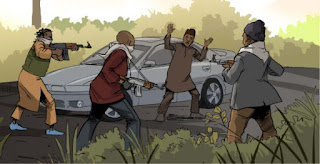 Ahmad Garba, a journalist kidnapped on his way from Abuja on the eve of governorship Elections, said he lost hope of coming out alive from the forest where his abductors held him.

He said his abductors kept threatening to kill him daily for the eight days he spent in their custody. Ahmad, a staff of Aminiya, a Hausa language paper published by Media Trust, narrated his ordeal.

He explained that the kidnappers killed one person in the commercial vehicle they were travelling in including the driver.

He said the incident happened around 6 pm close to Rijana town along Kaduna Abuja highway.

We were travelling in a commercial vehicle on our way back to Kaduna from Abuja when the kidnappers (All Fulanis) opened fire on the car at Rijana town. I didn’t know what happened. I only saw people coming out of the bush with guns. They killed the driver when he tried to escape and one other person.

” They took us inside the bush after about two-hour trek even though I was assisted by other victims because I couldn’t walk due to my health condition. We remain under their custody for eight days with their boss threatening to kill us all daily.  ‎in fact, due to his threat I completely lost hope of coming out alive, ” he said.

Ahmad said when the kidnappers discovered he was a journalist they kept insulting him telling him to make sure by the time he regains his freedom he tells President Buhari that he can’t stop them from their illegal activities.

He said when they finally let him go, one of the kidnappers gave him N1500 to use as transport. Daily Trust gathered that a friend of Ahmad took the risk to go and brought him home after the kidnappers called his family to send someone to get him because he was too weak to walk.

Ahmad thanked all who played a role to get him released from his abductors.