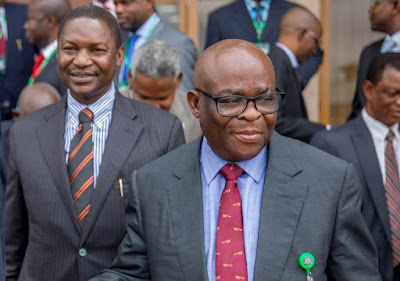 The Economic and Financial Crimes Commission (EFCC) has traced a car owned by Walter Onnoghen, the embattled chief justice of Nigeria (CJN), to Joe Agi, a senior advocate of Nigeria (SAN).

The anti-graft agency believes the car is a gift from the lawyer, who had cases before Onnoghen at the time of purchase.

But Agi has told the EFCC that aside being a senior lawyer, he is also a car dealer and Onnoghen bought the Mercedes GL 450 series from him for N7 million in 2010, sources revealed.

However, when he was asked to produce receipts of purchase and other documentation relating to the transaction, he could not do so.

Previously, the EFCC traced a deposit of $30,000 by Agi into Onnoghen’s bank account dating back to 2009.

He was also said to have had cases before the judge when he made the deposits.

Agi has since denied the allegation that the $30,000 was a bribe.

In a press statement, he said the money was from allowances paid to Onnoghen on seminars, holidays, conferences or medical trips abroad.

Agi said: “I have been acquainted with Justice Onnoghen, JSC in our days as Lawyers in Calabar, Cross Rivers State from the 1980s before he was appointed a High Court Judge.

“My Lord Justice Onnoghen said he had no idea since opening of foreign account was forbidden for Public Officers. I informed him that domiciliary account is not a foreign bank account as it is opened and operated within the local banks in Nigeria.

“It was on this note that I went to my banker Standard Chartered Bank and obtained Account Opening Forms for him as a friend and Senior Brother. He completed the Forms and I refereed him. He gave me $30,000 being left over of his allowances for overseas seminars, holidays, conferences or medical trips to deposit for him as the first deposit. This I did in 2009 i.e 10 years ago. After that, he operated the account himself without me paying even a cent into that account till date.

“Now 10 years after, I am again being vilified and accused of giving Justice Onnoghen bribe. If I may ask; bribe for which case? In the Supreme Court panel they sit in 5 or 7 persons, was the $30,000 for the 5 or 7 Justices? And for which case? This is another huge joke aimed at vilifying my person by the same cabal who are hell bent on tarnishing my image as an aftermath of the exposure of the Paris Club fraud.”

Agi is one of the lawyers defending Onnoghen in his asset declaration case before the Code of Conduct Tribunal (CCT).

Onnoghen is currently being tried by the CCT over allegations of non-declaration of some of his assets, although he said it was an oversight.

In a previous case, which was eventually dismissed, a foreign firm owned by Agi’s friend paid N30 million into the account of the wife of Adeniyi Adetokunbo Ademola, a justice of the federal high court, for their daughter’s wedding.

He was also said to have bought a car for Ademola’s son.

The case filed against him for “gratification” was dismissed on technical grounds, although many lawyers argued that it was a professional misconduct which should have been punished by the Legal Practitioners Privileges Committee.

Efforts  to reach Agi were unsuccessful as his phone rang out. He has also not responded to text messages.