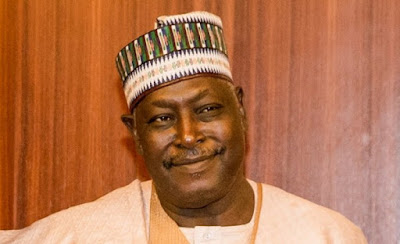 The Economic and Financial Crimes Commission has re-arraigned a former Secretary to the Government of the Federation, Babachir Lawal, and three others before Justice Jude Okeke of a Federal Capital Territory High Court, Maitama.

Lawal along with his younger brother, Hamidu Lawal, Suleiman Abubakar, Apeh Monday and two companies, Rholavision Engineering Ltd and Josmon Technologies Ltd, were re-arraigned on Monday on an amended 10-count charge bordering on fraud, diversion of funds and criminal conspiracy to the tune of over N500 million.

They were earlier arraigned before Justice Okeke on February 13, 2019, and the prosecution was meant to open its case.

At the resumed hearing, counsel for the EFCC, Offem Ukett, told the court that the charges against them had been amended, adding that they had to take a fresh plea.

However, citing Section 218 (2) of the Administration of Criminal Justice Act, ACJA 2015, Akin Olujimi, SAN, counsel for Lawal, argued that “before the charge is taken, the prosecution ought to have filed the amended charge to ensure that it was properly endorsed.”

Other defence counsels aligned themselves with the submission of Olujimi.

Justice Okeke, while ordering the prosecution to comply with the section cited by Olujimi, however, ruled that in the interim, the amended charges should be read to the defendants.

One of the counts read, “That you, Babachir David Lawal, while being the Secretary to the Government of the Federation and a director of Rholavision Engineering Ltd on or about August 22, 2016 at Abuja in the Abuja Judicial Division of the High Court of the Federal Capital Territory did knowingly hold indirectly private interest in the contract awarded to Josmon Technological Ltd. but executed by Rholavision Engineering Ltd. for the removal of invasive plant species and simplified irrigation to the tune of N258,132,735.99 by the office of the Secretary to the Government of the Federation through the Presidential Initiative for North East and thereby committed an offence punishable under Section 12 of the Corrupt Practices and Other Related Offences Act, 2000.”

A statement by the acting EFCC spokesman, Tony Orilade, said the accused persons pleaded ‘not guilty’ to the amended charges.

The defence team, thereafter, prayed the court to allow the defendants to continue with the bail earlier granted them by the court.

The international passports of the defendants were also ordered to be deposited with the court.