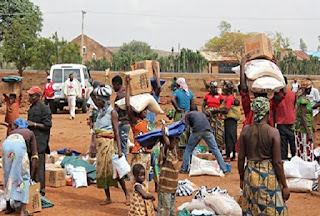 The National Emergency Management Agency (NEMA), says it has concluded the distribution of Post- Disaster Assistance to victims of various disasters that hit some communities in Bayelsa last year.

Recall that disasters that occurred in the state in 2018 included ocean surge, windstorms and flooding which destroyed property and displaced residents in some communities.

Mr Victor Nwaubani, NEMA’s Head of Operation in Edo, told newsmen on Sunday in Yenagoa that the distribution was carried out based on the agency’s assessment of the affected communities in the eight local government areas of Bayelsa.

According to Nwaubani, the distribution was completed on Saturday.

“Flooding is very common here and almost every community was affected last year; ocean surge affected Agge in Ekeremor and some communities in Brass local government.

“The windstorm occurred in Beseni in Yenagoa and Amassoma in Southern Ijaw. Also affected were Sagbama, Kolokuma/Opokuma local governments.

“The community leaders were part of the distributions and it was hitch free; I am very sure those items got to the rightful persons,” he explained.

He, however, urged the federal government to build standard Internally Displaced Persons (IDPs), camps, saying that some lands had been allocated but work was yet to commence.

Mr Pere Kennedy, one of the beneficiaries, also commended the federal government for assisting the victims.

“It’s awesome and I am thankful for the gesture. I got a fishing net. Thumbs up to our government,” an excited Kennedy said.