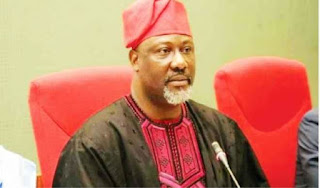 The police on Tuesday docked Senator Dino Melaye over allegations bordering on attempted suicide, attempt to escape from custody and damage of police property.

The Kogi West senator was arraigned before Justice Silvanus Oriji of a Federal Capital Territory (FCT) High Court in Apo on a six-count charge.

Dino denied the charge and was subsequently admitted to bail.

In admitting the defendant to bail, Justice Oriji said he was aware that the court had earlier granted bail to the defendant when he was first arraigned before the vacation court on July 25, 2018.

Justice Oriji also agreed that the bail conditions which included the sum of N5 million should continue and that Dino should produce two sureties in like sum stands.

He said sureties must be directors in the civil service, who reside in the FCT, and must depose to affidavits of means.

He thereafter adjourned the case to April 5 for hearing.

The prosecuting counsel, Dr Alex Izinyon (SAN), had told the court that the defendant committed the alleged offences on April 24.

He said Dino while being conveyed in a police vehicle to Lokoja, forced his way out and escaped.

Izinyon further said that the defendant sat on the ground, holding a substance in one hand threatening to drink it to kill himself so that he can put the police officers in trouble.

He also said that the defendant broke the glass of the vehicle with his elbow and caused damage to police property.