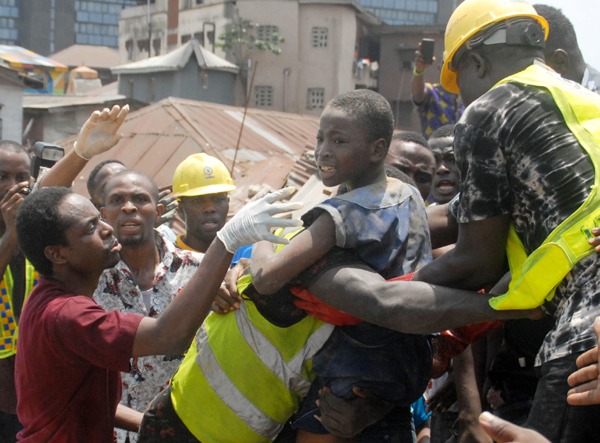 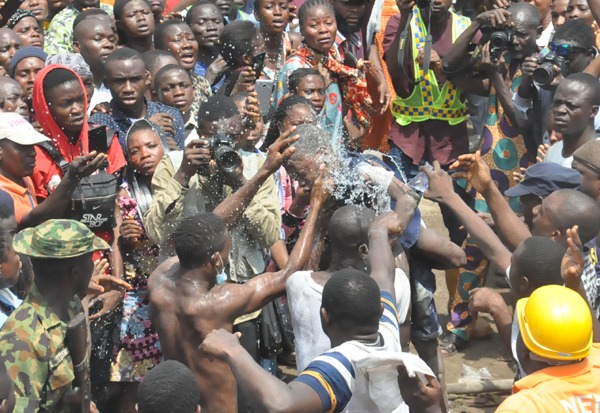 At least Twelve persons, including nine children, have been confirmed dead in the three-storey building that collapsed in the Ita-Faaji area of Lagos Island.

The building, which houses a primary school on the second floor, caved in on Wednesday morning while pupils were in their classrooms.

Officials of the Lagos State Emergency Management Agency (LASEMA) and other rescue officials had rescued some of the children trapped in the building, while those who sustained injuries among the pupils were taken to the hospital.

The Lagos State Emergency Management Agency has said that about 50 people have been rescued from the collapsed building at Ita-Faji, Lagos Island.

LASEMA General manager, Tiamiyu Adesina made this known at the scene of the collapse.

He added that the rescue team would remain on the scene until they can confirm that no one is left under the debris.

Meanwhile, Akinwumi Ambode, governor of the state, arrived the scene around 2:45 pm and was briefed by head of the LASEMA team.


The governor described the incident as unfortunate, while he commiserated with families of victims who lost their lives.

The governor said his deputy, Oluranti Adebule, had also visited the hospitals where some of the victims rescued had been taken to, saying the state government would immediately take over their treatment and foot their entire bill.

“I want to commiserate with the families of those that lost their lives in this collapsed building. I want to quickly let Lagosians know that this is quite an unfortunate incident. All we are trying to do is to scale up this rescue operation. Our response units are already here; we are getting additional cranes to be able to go deeper than where we are now to rescue more lives,” the governor said.

“I just want to appeal to people that when we are doing this kind of rescue operation, yes, sympathizers will naturally come but I want to appeal that they should give the rescue workers the chance to save more lives.

Ambode addressing the media at the scene

“All we are interested in now is to save more lives and also see how those that have been rescued are put in proper place and proper care.

“So far, from what I have been briefed, we have rescued about 25 people and some already dead but we were earlier informed that it was a school, the building is not technically a school, it is a residential building that was actually accommodating an illegal school so to speak on the second floor.”

Ambode said the school was operating illegally in the premises and that a full scale investigation would be carried out immediately rescue operations are concluded. He also vowing that those found culpable would be severely dealt with in accordance with the relevant laws.