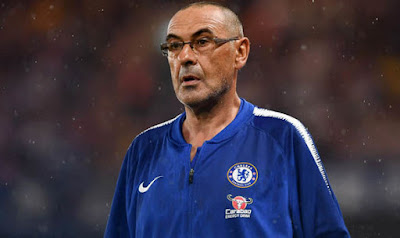 Richarlison punished Chelsea's profligacy just after half-time and Gylfi Sigurdsson converted the rebound from his own saved penalty to secure only the Toffees' second victory in nine Premier League games at home.

Marco Silva's men, who dramatically lost 3-2 at Newcastle United last time out, were thoroughly outplayed in the first half, but an improved performance from Jordan Pickford helped keep the visitors at bay.

Defeat for Chelsea, their first since the EFL Cup final, leaves them three points adrift of fourth-placed Arsenal with eight games remaining.

Eden Hazard first drove a deflected shot into the base of the upright, before Gonzalo Higuain's scuffed finish from Jorginho's inventive pass allowed Michael Keane to hack the ball clear.

Pickford had earlier denied Hazard at his near post and, after Pedro dragged marginally wide, will have welcomed half-time.

However, Everton emerged from the interval transformed and Richarlison nodded them ahead in the 49th minute when Kepa Arrizabalaga parried Dominic Calvert-Lewin's header straight to the Brazil forward.

Marcos Alonso hit the side-netting with a good chance to respond and compounded that miss by tripping Richarlison in the box at the other end.

Sigurdsson stepped up 18 minutes from time and, after seeing Kepa save his initial attempt, pounced on the rebound to complete Everton's first win in this fixture in seven attempts.

Chelsea really only had themselves to blame for allowing Everton to seize control of this contest and will now find it difficult to overhaul both Arsenal and Manchester United in the run-in.