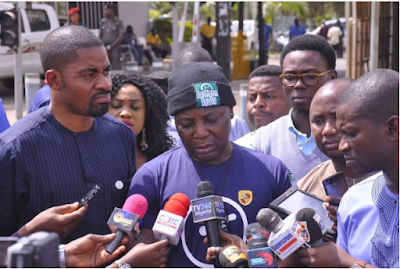 NigerianEye reported a video on Friday which had Charlyboy confessing to have collected money from Keyamo to promote his song which was against Atiku Abubakar.

But in a swift reaction, the movement in a statement issued Charlyboy 24 hours ultimatum to resign as the co-covener of ‘Our Mumu Don Do’

The statement reads: “Following an Emergency General Meeting which held today, 22 March 2019, to address the slew of scandalous materials attributed to you, and your subsequent public avowal to have engaged in amoral pecuniary dealings with the spokesperson of General Muhammadu Buhari, Mr. Festus Keyamo, whom the OurMumuDonDo Movement has been publicly and completely critical of, the management of the OurMumuDonDo Movement, in a bid to save the movement from public ridicule, unfortunate collapse and also reinstate public confidence, has decided on the following:

1. That your amoral and illicit dealing with the oppressors during a period when one of our fearless comrades, Deji Adeyanju, was banished to a hellish hole in Kano State for his fearless criticisms of the oppressors, represent a flagrant violation of the Foundation’s moral, ideological and constitutional focus.

2. That your unscrupulous hamartia has not only affected the credibility of the OurMumuDonDo Movement but also the myriads of conscientious and genuine Activists, Right Groups and Civil Society Groups in Nigeria.

3. That we have come to the doleful conclusion that you step aside as a Trustee of the Foundation and as the Convener of the OurMumuDonDo Movement within 24hours starting from the moment you receive this letter today, 22 March 2019. Failure to comply with this recommendation shall leave us with no other option but to ask members of the public to cease any further dealing and interface with you, and we shall not hesitate to take all necessary lawful steps to ventilate our remonstrance and ensure that the credibility of this Foundation is protected.

“We must mention that this decision is not borne out of any personal vendetta but rather a fervent commitment to salvage the OurMumuDonDo Movement from public ridicule and imminent collapse.Your honorable compliance will be highly welcomed.”