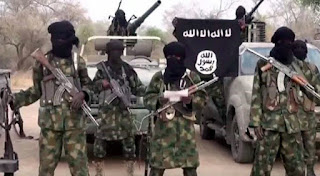 The District Head of Duhu and the surrounding communities in Adamawa State, Mohammed Sanusi, said on Tuesday Boko Haram fighters attacked two villages in Michika and Madagali on Monday night, burning houses and looting food stores. The incidents forced many of the villagers to flee their homes.

Some of the villagers, who spoke to journalists from their hideouts, said the sick, the elderly and children were threatened at gunpoint by the insurgents.

However, we could not confirm if lives were lost during the attacks.

According to Sanusi, the insurgents were on a revenge mission after they were repelled by troops when they attacked Michika and Madagali seven days earlier.


Unconfirmed reports said the attacks had something to do with the political uncertainty in the state after the Independent National Electoral Commission declared the March 9 governorship election inconclusive.

Sanusi said, “Boko Haram fighters attacked Kofar Adamawa and Kofar Borno at about 6.30pm on Monday night. They burnt half of the houses in Kofar Adamawa and razed the houses in Kofar Borno. They marched through the villages, threatening to kill whoever challenged them. When they came to Michika seven days ago, they came in through these two villages because their usual routes were blocked by villagers and soldiers. I cannot confirm now if there were casualties.

“The last time they came, they destroyed Union Bank’s vault but there was no money there. They stole medicines from drugstores, petrol from functioning stations and foodstuffs from markets and stores. But when the soldiers confronted them, they left some of their vehicles behind with the items.”

He said soldiers were unable to reach Kofar Borno to confront the terrorists because of the trenches along the bank of the river between Adamawa and Borno states.

“But on Monday, they left their vehicles on the other side of the river and marched into the villages. Troops were unable to reach the villages from Michika because of the trenches. That was why the insurgents were able to burn the whole of Kofar Borno.”