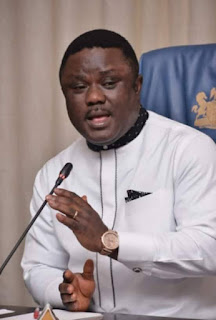 Following renewed crisis involving the people of Ukelle, Yala in Cross River State and the Izzi people of Ebonyi, Cross River governor, Prof Ben Ayade, Monday, called on the Nigerian Air Force to join hands with the state to restore peace in the area.

Ayade who was addressing the Air Officer commanding Mobility Command, Peter Uzezi, at Government House Calabar said: “I received a text that there is a full-fledged war between Cross River and Ebonyi going on right now, around the Izzi, Ebonyi and Ukelle, Cross River area. Lives are being lost, they are firing and killing, even as arson is taking place there right now.”

The governor who recalled that there was also a reported crisis between Osokpong community in Obubra, Cross River and its neighbours in Ebonyi, enjoined the Air Force group to carry out helicopter flights to ascertain and put in check the security situation in the affected area, adding: “I have also spoken to Commander, 13 Brigade to move his men to Ukelle.”

Commending NAF for the protection during the pre-surrender of arms period by the Bakassi Strike Force, Ayade called on the Chief of Air Staff, Air Vice Marshall Sadiq Abubakar, to domesticate one helicopter in Cross River in order to give the needed practical protection from the air cover.

The governor said the plea was critical as it will check the lingering crisis involving Cross River and its neighbouring states including international communities who share boundaries with the state, maintaining that, “the length of the state and its advantage of having two airports need to be considered as the factors will make the operations easy and useful.”

Responding, Uzezi assured that he will contact Air Force Headquarters to bring in surveillance airplane to fly and see what exactly the situation on the ground is, as NAF leadership will ensure that Cross River State, as well as others in the country, remain secure.

“Nigerian Air Force was established in 1964 by an Act of Parliament to protect the people. We are obliged to do that, we are not selective. I will bring this crisis issue up with the Air Force headquarters to bring in surveillance airplane to fly the area and see exactly what the situation on the ground is,” the Air Officer Commanding Mobility Command assured.

Uzezi explained that “the military was established for the people of Nigeria to maintain peace and security and that is what Nigeria Airforce has been doing over the decades,”  adding that “the Mobility group in Calabar was established in the 90s to help complement the security efforts that NAF is contributing to.”

The Air Officer who has just been deployed to command mobility units including 305 Special Mobility Group which is domiciled in Calabar, also listed as one of the critical assets of NAF to the development of Cross River, the provision of a current geographical map with road networks and footpaths.

He disclosed that Calabar remained the primary base of the helicopter and a very active helicopter base with a wing in Lagos.

He said at the moment the airplanes were undergoing an overhaul, pointing out that one of the helicopters from Calabar was recently used for military operations in the northern part of the country.