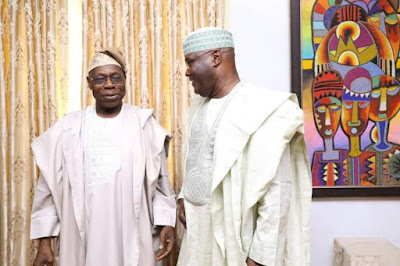 The Presidential candidate of the People’s Democratic Party (PDP), Alh. Atiku Abubakar was in Abeokuta, the Ogun State capital, on Thursday for a private meeting with his former boss, Olusegun Obasanjo.

Atiku who arrived Olusegun Obasanjo Presidential Library (OOPL), Abeokuta, around 1:00 pm, observed his prayer at the mosque within the sprawling OOPL facility, had lunch later with his host and left quietly, a source close to the Ebora Owu, told newsmen.

It was not clear what the former Vice – President discussed with Obasanjo during his short visit, but there were insinuations that both might have deliberated on the last Presidential election which Atiku contested on the platform of the People’s Democratic Party (PDP) but lost to the incumbent President Muhammadu Buhari of the All Progressives Congress (APC).


“I can confirm that Atiku visited Baba Obasanjo today around 1: pm. It was purely private visit. He came, observed his prayer, had lunch with Baba and left. The visit was brief. There was nothing else done,” the source said.