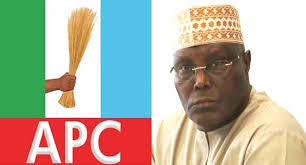 The Campaign Council of the All Progressives Congress President-elect has formally lodged a complaint against the opposition Peoples Democratic Party (PDP) and its candidate for criminally hacking into the server of the Independent National Electoral Commission.

The complaint lodged in a letter today to the Acting Inspector General of Police and the Director General of the Department of State Services, followed the citing of alleged election results contained in the server in the petition filed by Abubakar Atiku and the PDP against the election of President Buhari. Atiku claimed he was the winner of the election and that he got 1.6million more votes than President Buhari.

The complaint signed by Festus Keyamo, the Buhari campaign spokesman, urged the police and the DSS to invite, interrogate and investigate the PDP leaders over their admittance of illegal access to the INEC server. The letter said the figures being quoted by the PDP were the fake voting figures posted on the server before the postponement of the presidential election on 16 February.

“The only conclusion one can draw from the above is that the PDP had prepared those results which were to be smuggled into the INEC Server. However, the sudden postponement of the election scuttled that evil plan, but it was too late to restrain the release of the fake results”, the letter read.