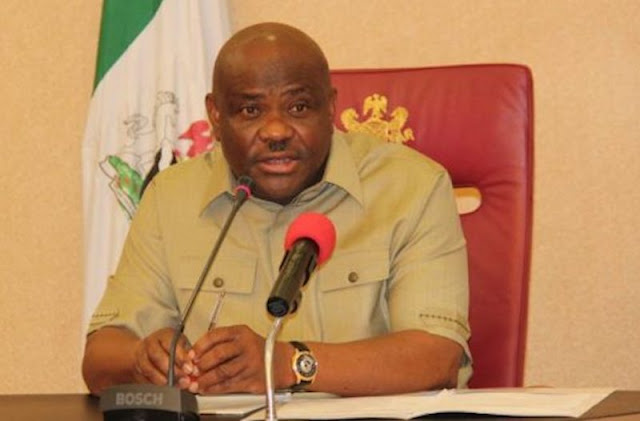 The governorship candidate of the African Action Congress in Rivers State, Biokpomabo Awara, says he is leading Governor Nyesom Wike of the Peoples Democratic Party in the results of the governorship election in the state.

He made the claim after the Independent National Electoral Commission (INEC) suspended the collation of results Sunday evening.

Mr Awara is being backed in the elections by the All Progressives Congress (APC) which is led in the state by the Minister of Transportation, Rotimi Amaechi.

The APC adopted the AAC after it was disqualified from participating in the elections due to the crisis over its primaries.

INEC cited reports of widespread disruptions of the elections for its suspension of the results collation process.
Sources revealed on Monday that observers and INEC officials in the state sent the reports of disruptions to the electoral commission’s headquarters in Abuja.

Reacting on Monday afternoon through a statement he made available in Port Harcourt, Mr Awara said the suspension of the collation process was a move to help Mr Wike gain some “respite” and “frustrate my victory.” He then rejected the suspension.

He said the collation exercise had ended in seven local government areas and that he secured 289,773 votes against Mr Wike’s 76,633 votes in those areas. According to him, the areas are Ahoada West, Eleme, Asari Toru, Akuku Toru, Ikwerre and Oyigbo.

But while the PDP and Mr Wike are also claiming a win already and asking that the “results should not be changed”, INEC at the state level did not confirm any of the claims.

According to his Linkedln profile, Mr Awara is an engineering graduate from the Rivers State University of Science and Technology and has worked with Shell. Until last Wednesday when he was endorsed by the APC, which has no candidates in the elections, he was not considered a serious challenger to Mr Wike.

Continuing in his statement, Mr Awara said the collation exercise was still ongoing in 16 LGAs, including Mr Wike’s Obio Akpor, before the suspension was announced.

He said: “The INEC pleaded insecurity, violence, seizure of electoral materials by hoodlums etc. as the reasons for suspending the remaining stages of the Election. I reject the reason given by INEC. This because in the Local Government Areas that were affected, voting had concluded, results declared at the polling units and collation had begun before the abrupt suspension of the process. The Commission does not have the power under our Electoral Act to suspend elections that has already been concluded.”

Mr Awara accused the INEC in the state of partiality and being compromised by the state government.

“The Resident Electoral Commission, all the Electoral Officers, Assistant Electoral Officers, Heads of Department in the Rivers Offices of The Commission were all working for the candidate of the Peoples Democratic Party. No wonder when they saw that I was leading and would eventually win the election, they raised a false alarm to the Headquarter of the Commission and misinformed them that there was widespread violence and seizure of electoral materials.

“We have on good authority the following facts:

“i. Every Local Government Council Chairman in Rivers State pays the sum of One Million Naira (N1,000,000) the Electoral Officer assigned to his Local Government and other sums of money to other electoral personnel;

“ii. The Resident Electoral Commissioner was bought a house for in Maitama Area of Abuja by the Governor of Rivers State, who incidentally is the Governorship candidate of the Peoples Democratic Party (PDP); and

“iii. The Administrative Secretary of the Rivers State office of the Commission, Elder Etim John was paid the sum of Three Hundred Million (N300,000,000) Naira by Governor Wike as inducement to secure 100 per cent posting of the Ad-hoc staff list in favour of the PDP.

“To justify the financial inducement given to him by the Governor, the said Administrative Secretary Elder Etim John did not only ensure that the posting of the Ad-hoc staff overtly favoured the PDP but he also got carried away to the extent that he even included the names of well-known relatives of some PDP candidates and chieftains in the list.

“On his part, the State Resident Electoral Commisioner (REC) Mr Oboe Efaga on the eve of the election replaced most of the ad-hoc workers which were already published on the Commission’s notice boards with the names of card carrying members of the PDP. For instance, in the following Local Government Areas the under listed persons were suddenly deployed as Local Government Collation Officers:”