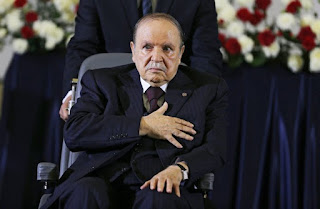 Ahmed Salah, Algeria’s chief of army staff, has demanded President Abdelaziz Bouteflika be declared unfit to rule after weeks of protests against him.

The army chief urged an immediate adoption of the country’s Article 102, which allows for a president to vacate office if declared unfit.

“We must find a way out of this crisis immediately, within the constitutional framework,” he said in a speech on television

“This solution achieves consensus and must be accepted by all.”

This comes days after the 82-year-old leader who got to power in 1999, dropped his reelection ambition following a wave of protest.

The protests broke out after Bouteflika who was on sick bed in Switzerland, said he would contest another election.

Salah has previously said the military and the people had a united vision of the future, hinting at the armed forces’ support for the demonstrators.

Given the reality of president Bouteflika’s health status, the constitutional impasse over an extension to his current mandate until elections are held, and the rallying calls by protestors who remain on Algeria’s streets, the move is hardly unexpected.

In recent years, it is the president’s circle of political and army loyalists who appear to have spoken on his behalf as his absence peaked due to illness.

He came into office, backed by the army, after the 1990s civil war and was largely viewed as a unifier of the many factions underpinning Algerian politics.

But since suffering a stroke in 2013 he has rarely been seen in public and does not travel around the country or abroad, except for medical treatment.

His aides represent him at events and read his messages to the public, and the announcement that he was not standing for a fifth presidential term was read on his behalf by a newsreader on national TV.