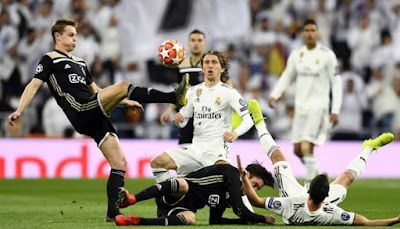 Stunned holders Real Madrid were sent packing from the Champions League on Tuesday, a 4-1 home hammering by Ajax seeing them lose their last-16 tie 5-3 on aggregate.

Moroccan midfielder Hakim Ziyech fired Ajax into a shock seventh-minute lead after a lay off from the outstanding Dusan Tadic, who also provided the pass for David Neres to double the Dutch side's advantage in the 18th.

Madrid, who were missing inspirational captain Sergio Ramos through suspension and hit the woodwork twice in the first half, came out stronger after the interval but were dealt a fatal blow when Serbia international Tadic crowned his sensational display by hammering into the top corner in the 62nd minute.

Substitute Marco Asensio gave Madrid a glimmer of hope by striking back but it was quickly extinguished by a breathtaking free kick from Lasse Schone, condemning Real to a fourth consecutive home defeat in all competitions.

Things got worse for the hosts, who had won the last three Champions League titles in a row, when Nacho was sent off in stoppage time for two bookings.

Real had won the Champions League in each of the last three seasons and led 2-1 from the first leg, but they were humiliated by the Dutch side, who go into the last eight for the first time since 2003.