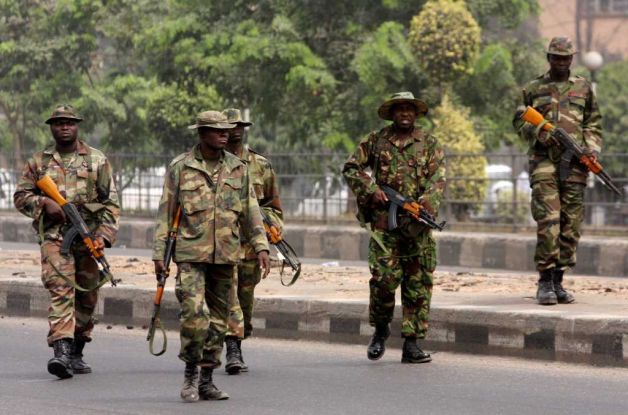 There was tension and unease among residents in some key states of the country on Friday as the Nigerian Air Force Intelligence, Surveillance and Reconnaissance jets began air patrols over perceived flashpoints in the North-East, Kwara, Adamawa and Rivers states.

The patrol was going on just as soldiers and policemen deployed for the elections took over the streets and some strategic locations in Rivers, Delta, Adamawa, Bayelsa, and Akwa Ibom states ahead of the governorship and Houses of Assembly elections holding on Saturday (today).

Residents and indigenes of Adamawa, Rivers, Akwa Ibom, Bayelsa and Kwara complained of intimidation by security forces patrolling parts of their states.

In Adamawa, our correspondents noticed the movement of security vans from Yola to other parts of the state on Friday morning.


Some of the indigenes who spoke to journalists said the stakes were high in the state because the wife of President Muhammadu Buhari, Aisha, is from the state.

Aisha had supported her brother, Mamhud Ahmed, in the race for the governorship ticket of the All Progressives Congress but he lost to the incumbent governor, Jibrilla Bindow, coming second in the contest.

Despite the loss, Aisha is said to be interested in proving her worth as the President’s wife by winning the state for the APC.

Moreover, the state governor is facing allegation of certificate forgery and if the court rules against him even after winning, it could pave the way for Aisha’s brother to emerge as the APC candidate.

The state is also under pressure because the Peoples Democratic Party presidential candidate, Atiku Abubakar’s political relevance depends on the success of the PDP in the state after the INEC declared him (Atiku) the runner-up in the recent presidential election.

Atiku won the state in the last presidential race by a slim margin but his party, the PDP, is of the view that the election was rigged to reduce Atiku’s votes.

A civil servant in the state, who simply gave his name as Gregory from Michika, said Michika was under security ‘siege.’


“I will vote in Michika but when I called on Friday morning to notify my family of my intention, they warned me to leave Yola early because already Michika was under police siege because of the election. The interest of Atiku and Aisha Buhari is putting a lot of pressure on the state. If Atiku loses the state to the APC, he would have lost his base. Aisha is fighting for her position as the wife of the President and the possibility of her brother becoming governor,’” he said.

But a NAF top source said, “The Air Force ISR platforms cannnot be visible in every state because of logistic constraints, you don’t expect us to deploy in the 36 states. But there are flashpoints and states where you suspect that violence may want to occur.

“The ISR will be visible as usual in the North-East axis, South-South, South-West, Kwara and other places that crop up on the election day.

“But the aircraft are mainly for surveillance and nothing more. The security personnel are on the ground to manage any situation.”

In Delta State, security has been beefed up around major flashpoints.

Our correspondent reports that more security operatives have also been deployed in the riverine areas including the creeks of Warri South-West, Burutu, Bomadi and Warri-North local government areas.

Our correspondent observed on Friday patrols by military operatives around the oil city of Warrri, Effurun, Udu and Ughelli.

There was also heavy presence of policemen on stop-and-check duties along the Otor-Udu/Otu-Jeremi road and along the DSC Expressway.

Some military trucks were sighted stationed at the Effurun Market along the PTI Road in Uvwie LGA near Warri.

At the INEC office in Warri, security operatives were also sighted, although activities had yet to commence at the centre.

The spokesperson for Gbaramatu Kingdom in the Warri South-West Council Area of the state, Chief Godspower Gbenekama, described the heavy presence of security agents in the area as unnecessary.

Gbenekama while querying the rationale behind the massive deployment of security men in the creeks, however, noted that there was electoral violence during and after the presidential election.

In Bayelsa State, there was an uneasy calm among residents of Yenagoa, the Bayelsa capital and the indigenes of the neighbouring communities as more soldiers and policemen were seen moving around and stationed in strategic locations.

As early as 6am on Friday, the military presence in the state drawn from the Navy, Army and the Air Force were reinforced.

The police command also received a new commissioner while more police officers and men were seen arriving in different convoys. The Nigeria Security and Civil Defence Corps also got reinforcement.

The new Commissioner of Police, Shola David, had arrived in Yenagoa, earlier on Thursday.

While the military commands stationed in the state refused to comment on the development, the Police Command spokesman, Asimin Butswat, confirmed the arrival of more men and officers.

There was an aerial show of force by the Air Force as helicopters flew over the metropolis as early as 9am.

Most of the residents who spoke with our correspondents expressed worry over the development, saying that Bayelsa must not be turned into a war zone.

In Akwa Ibom State, soldiers, mobile policemen and three commissioners of police have reportedly taken over the state.

Four MOPOL units, including Special Protection Units, have been deployed in the state.

A source who monitored developments reports heavy presence of combined team of soldiers, mobile policemen and civil defence corps stationed in many places around Uyo metropolis.

The armed personnel were noticed in many places including the INEC headquarters.

Kaoje who spoke through the command’s Public Relations Officer, Odiko Macdon, at a media briefing, however, said the additional deployment was not meant to harass and intimidate voters but to keep the peace before, during and after the elections.

“Yes we have more deployment of mobile policemen in Akwa Ibom. About four mobile units, including Special Protection Units and three commissioners of police have been deployed in the state.

“However, let me stress that they are not here to harass and intimidate voters. They are here to maintain peace and order before, during and after the elections,” he said.

Reacting to the belief by some people that the police command was working for a particular political party, he said, “The police should not be misconstrued to be taking sides with any political party. We remain apolitical and professional in the discharge of our duties. We are committed to free, fair and credible polls. I therefore use this opportunity to call on all eligible voters to come out and exercise their civil responsibility of voting for any candidate of their choice.”

Residents of Ilorin, the capital of Kwara State, woke up on Friday to witness joint security patrol round the metropolis.

The operatives comprised policemen, soldiers, naval officers, members of civil defence, Immigration, NDLEA and Air Force. They were led in a convoy by the Federal Road Safety Corps as they moved round major streets in the city.

Also, the Air Force jet deployed in the state for the election was seen flying round the town in the morning while the police helicopter was sighted around the state capital.

It was observed that the residents stayed indoors in the morning as most streets were deserted till about 10 am, few taxi cabs and private cars were noticed in some major streets in the town.

There was palpable tension in Rivers State on Friday as stakeholders, elders, and women continued to raise the alarm over the alleged arrest of some indigenes of the state, who were members of the Peoples Democratic Party.

In Ogu/Bolo Local Government Area, a group of women in black attires, protested against the alleged arrest of the liaison officer to the state Governor, Nathan Menabere, and six members of the PDP in the early hours of Thursday.

Calling for the immediate release of the arrested persons, the leader of the protesting women, Mrs Christiana Tamunobereton-Ari, decried the action of the security agents.

According to her, a group of soldiers invaded Ogu at about 1am, broke into some houses and arrested the affected persons without any reason.

Also, a group of elders and stakeholders in Rivers State accused the All Progressives Congress of plans to cause chaos that would lead to the declaration of a state of emergency in the state.

Speaking under the auspices of Elders and Leaders of Rivers State, they explained that the plan by the party was to introduce violence to the exercise.

A statement issued in Port Harcourt on Thursday also indicated that the ploy to unleash violence during the election would disenfranchise many indigenes and residents of the state.

The elders also pleaded with President Muhammadu Buhari to intervene.

“We must condemn the reported plans by the leadership of the APC to destabilise the state and perpetuate violence during the governorship and state House of Assembly elections as a ploy to be used to declare a state of emergency in the state and/or to ensure that the elections in Rivers State are inconclusive,” the statement read in part.

When contacted, the state APC Publicity Secretary, Chris Finebone, described the allegations against the party in Rivers as absolutely false, adding that his party was not involved in any plan to cause chaos.

Finebone explained that persons that signed the statement were the people planning to cause unrest in the state.

“The allegation against the APC is absolutely not true. They are perhaps the ones planning chaos and not the APC,” Finebone stressed.

The state Governor, Nyesom Wike, described the arrest as stage-managed, unlawful, and urged security agencies to be professional and unbiased in the discharge of their duties for the peaceful conduct of credible polls in the state.

“We want to warn that such biased, politically-induced arrests and malicious jailing of the PDP leaders only serve to heat up the already volatile political atmosphere with heightened tension and dissension, which could cause serious problems to the peaceful conduct of the governorship and House of Assembly elections in the state,” he said.

Meanwhile, the Coalition of United Political Parties on Friday flayed the presence of soldiers in Rivers, Akwa Ibom and Delta, among others ahead of the governorship and state Houses of Assembly elections.

The coalition’s national spokesman, Imo Ugochinyere, condemned the development in a statement made available to journalists.

Ugochinyere said, “The homes of the PDP leaders and serving government officials in Rivers, Akwa Ibom and Delta states are being broken into by soldiers.

“Massive kidnaps and abductions of party leaders and people who have roles to play in tomorrow’s (Saturday’s) election are ongoing. Election officials are being surrounded in some areas in preparation to use them to announce fake results tomorrow.

Similarly, the coalition of civil society groups and election observers on Friday called on the international community to prevail on President Muhammadu Buhari to stop the ongoing militarisation of elections in Nigeria.

The coalition said, “We are calling on all ECOWAS, African Union and the United Nations to immediately prevail on President Muhammadu Buhari, to cease the ongoing hostilities against the people of Delta, Akwa Ibom, Bayelsa and other states, presently under military hostage ahead of Saturday’s elections.”