2019 ELECTION: If Buhari went to court three times without any reasonable cause, Atiku should go too — Obasanjo 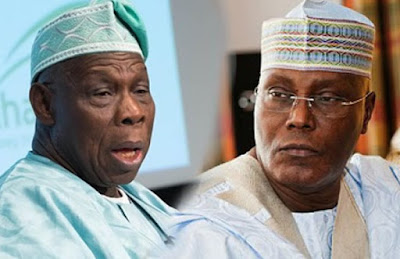 Former President Olusegun Obasanjo has supported the decision of the presidential candidate of the Peoples Democratic Party, Atiku Abubakar, to challenge the victory of President Muhammadu Buhari at the Presidential Election Petitions Tribunal.

Obasanjo said this in a statement he personally signed, dated March 23, 2019 and titled ‘Statement by Olusegun Obasanjo on the judgement of the Osun governorship election petitions tribunal, Dubai.”

The statement was made available to newsmen in Abeokuta on Saturday.

The former president argued that if Buhari had challenged his defeat in three previous presidential contests before his 2015 victory, Atiku should not be dissuaded from contesting his loss at the election tribunal.


He equally berated those who had called on his former deputy not to challenge his defeat at the tribunal, tagging them “evil minds.”

Obasanjo said, “Nigeria is of age; and if Buhari could go to court three times to seek justice, even without reasonable cause, any Nigerian, who feels denied of justice must feel free to go to court.

“Those who have conceived and are promoting the narrative that if Atiku Abubakar continues to seek legal redress, there will be violence, are evil minds looking for excuse to unleash violence on Nigerians.

“At no time in history has sustainable peace built on theft, injustice, corruption and inequality.

“These merchants of chaos and violence should have no place in any decent society. And they must know that no intimidation or prophecy of violence and doomsday will cow anybody. Nigeria belongs to Nigerians.”

Obasanjo added, “We will respect as friends those who believe that what is good for their country should be good for Nigeria.

“Yes, we are Africans but we have values that are consistent with international standards.

“Court is part of our democratic process and it must be used when necessary if only to achieve justice, stability, unity and progress for our country.”

The former President, however, hailed the verdict of the Osun State Election Petitions Tribunal which upturned the victory of the governorship candidate of the All Progressives Congress, Gboyega Oyetola, and declared the candidate of the Peoples Democratic Party, Àdemola Adeleke, as the winner of the September 22, 2018 contest.

Obasanjo believed that the verdict of the tribunal had renewed confidence in the judiciary.

He nevertheless alleged that there were coordinated efforts by some unnamed political leaders to undermine or destroy Nigeria’s democracy.

The former President added, “While I was in Dubai to attend the global education and skills forum meeting, I received the news of the judgement of the Osun State governorship election petitions tribunal declaring Senator Ademola Adeleke, the candidate of the Peoples Democratic Party, the winner of the 2018 governorship election in the state.

“Let me take this opportunity to commend the tribunal for its courage in nullifying what was clearly an illegality.

“This action by the judicial officers, albeit a first step in the legal process, gives renewed confidence in the judiciary at a time when there are coordinated efforts by some political leaders to undermine, if not destroy it.”

Obasanjo warned that whatever happened to democracy in Nigeria would have implications not just for Africa but the world.

He said, “As I have repeatedly said, the world is watching events in Nigeria with keen interest.

“What we do or do not do right in our electoral process will have implications not just for Nigeria, but for Africa and indeed the world.

“By correcting what was clearly a desperate attempt to change the will of the Osun people, the tribunal has saved Nigeria from great embarrassment and started the process of saving and strengthening our democracy.”

Obasanjo, however, commended Adeleke for challenging his defeat in court.

The former President, however, explained that he had refrained from passing comments on the 2019 presidential election because a party in the contest had gone to court to challenge the outcome.

Obasanjo stated, “We will continue to sustain Nigeria in stability and unity on the altar of justice, equity, fairness, freedom, human rights and democracy.

“Nigeria will march forward with or without those who will want to feed us with diet of values and actions that are not acceptable in their own countries.”