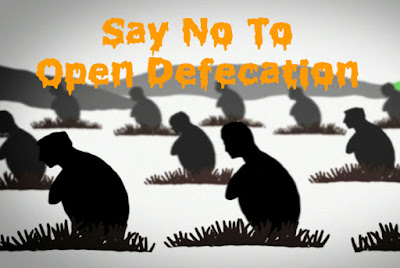 Open defecation, according to UNICEF, refers to the practice whereby people go out in fields, bushes, forests, open bodies of water or other open spaces rather than using the toilet to defecate.

According to WHO/UNICEF, open defecation is more common in South East Asia and sub-Saharan Africa with the two regions accounting for the largest proportion of the population without sanitation access.

Adamu, however, hoped that after the inauguration of the National Action Plan, there would be a purposeful collaboration in activities towards achieving access to potable water, sanitation and hygiene for all Nigerians and renewed commitment to achieving an Open Defecation Free nation by 2025. The minister also noted that one in four Nigerians, about 24.4 per cent, defecated in the open.

Despite the infrastructure developments in some states, the issue of open defecation has continued unabated in Nigeria. In Nigeria, it was revealed, no single council area was open defecation free. It was estimated that over 48 million Nigerians practise open defecation, placing Nigeria as the second in the world behind India. There are public spaces where Nigerians defecate openly and 10 popular ones are highlighted below.

Most public schools in Nigeria are accessible to everybody either one has a child or ward schooling there or not. In fact, most of them are gated and manned by guards who are elderly in most cases. But despite this, during and after school hours, people are often seen loitering around the buildings. There have been cases when pupils enter their classrooms the next day to see the tables and benches soiled with cigarette butts, nylons, water and food remnants. The fields in many of the public schools are also often used by emerging, young footballers as training grounds on weekends. It’s not uncommon to see faeces in classrooms. Some urchins and those who take over the schools after the pupils have gone to their homes are usually responsible for this.

This is one of the easiest places where Nigerians defecate openly. The mindset is that since water flows ceaselessly, it will push the faeces far away. They don’t consider the environmental implications of their action. So, across rivers, beaches and refreshing water bodies, while some do laundry, others empty their waste matter into them. Sometimes, the defecators, having finished the task, wrap the faeces in a black nylon and throw it far into the running water. This process is locally called ‘shot put’, mimicking the shot put track and field event in which a heavy spherical object (the shot) is ‘put’ as far as possible.

It’s not surprising to many when driving or on a bus on the highways to see some persons answering the call of nature at strategic arenas. These people are usually not bothered that occupants of speeding vehicles marvel at their actions as they keep straight faces. It’s also disturbing to imagine how the open defecators will clean the passage as they are often seen without water or tissue papers.

This is probably the most popular among the public places where open defecation takes place in Nigeria. This is because there are many people who quickly take advantage of the several bushes dotting many areas across the country to ease bowel discomfort. Particularly, in what is known in Nigeria as new sites, faeces decorate bushes in them. Even some passengers in interstate buses sometimes appeal to drivers for stopovers to defecate. And of course, they do it in bushes, moving a bit farther away from the prying eyes of co-passengers awaiting them in the vehicles.

Unlike other open places, both males and females defecate openly in this place. If they are not with water or tissue papers, chances are that the grasses will pitiably serve that purpose.

Since most buildings yet to be completed are located in developing towns and communities, it’s often the case that people use them as faeces collectors. This is quite common especially if the buildings that are not monitored or fenced and people have unfettered access to them. They can make a choice of the suitable part to use in any of the unfinished rooms and mess it up to their delight. Clearing the decomposed faeces will thus be the duty of the house owners anytime he or she is ready to resume construction works.

Open markets are open to abuse and this is because some people inhabit the place after trading has ended and sellers return home with their goods. It’s easy to find faeces littering many areas in open markets which sellers have to contend with before resuming trading the next day.

Like open markets, some motor parks are also abused in similar manner. Though some states operate motor parks with mobile toilets, other makeshifts motor parks lack toilets, thus passengers, sellers and drivers alike defecate openly within the confines of the park. Rail tracks are also not spared this disgusting habit.

Since most drains are open in many areas in Nigeria, it is easy for people to squat on the slabs and defecate. The notion is hinged on the warped thinking that the drains collect dirt, concluding that faeces should be among what goes into them.

People take shelter under bridges, especially in urban areas. And as there are often no toilets in the places since they aren’t approved residential areas, the dwellers pass faeces indiscriminately.

Like effigies cast in iron, some usually stoop on mountainous heaps of rubbish at dump sites to empty their bowels. They often don’t give a hoot about passers-by sneering looks. The disconcerting aspect is that the arena is as unpleasant as the faeces. Yet, they carry on with the nauseating activity even some smoke while the activities are on.

An environmental health expert, Dr. Olufemi Aluko, says open defecation promotes contact between man and his excreta, contaminates soils, water and food and, facilitates the faecal-oral transmission of pathogens that cause diarrhoeal diseases.

Aluko, of the Environmental Health Unit, Department of Community Health, College of Health Sciences, Obafemi Awolowo University, Ile-Ife, Osun State, said the WHO/UNICEF had noted that globally, about 40 per cent of the 2.4 billion people lacking access to improved sanitation facilities defecated in the open (946 million), translating to 15 per cent of the world population.