Why I was accused of trying to Islamise Igboland – Okorocha 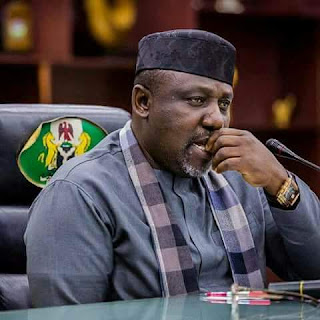 The Governor of Imo State, Rochas Okorocha has disclosed why he was accused of trying to Islamise the South-East.

Okorocha pointed out that his decision to campaign for President Muhammadu Buhari in 2015 made Igbo accused him of attempting to Islamise the region.

The governor spoke during his campaign rally in Owerri, the state capital, yesterday.

He also urged the people of the South-East to vote for President Buhari on Saturday.

Okorocha said voting for Buhari on Saturday was the only shortest route to a presidency of Igbo extraction in 2023.

He said the South-East people have their destiny in their hands, as he regretted that some Igbo politicians are allegedly campaigning to deceive the Igbo again, as they did in 2015.

According to Okorocha: “Some people, especially our brothers are campaigning now against president Buhari, saying he is Boko Haram and a herdsman, etc.

“You can remember in 2015, I was telling the Igbo, to cast their votes for Buhari because he would win with or without the votes of the Igbo.

“I was called all sorts of derogatory names. Some said I was going to Islamise the whole Igbo. Is Igbo land Islamised today?

“Igbo, today, are playing politics with the mindset of a trader, thinking only of the immediate benefits, unlike other tribes that are playing real politics.

“My people, listen to me and listen real good, whatever I tell you to do, do it as it will profit us. I’m telling you, today, that Buhari will win.

“On Saturday, if Igbo support Buhari and hewins, in 2023, Igbo will have the right to demand Igbo presidency. Those who love Igbo nation must vote for president Buhari because if we miss this chance, we may not get the presidency even by 2023, 2027 or 2031.

“The time is right for the Igbo nation to play the right politics, so as to have a clear chance by 2023.

“On Imo State governorship, the president advised that we all vote according to our conscience. Conscience in Igbo is ‘mee uche gi’, which translates to voting for Uche Nwosu. Nwosu is the only credible person amongst all those vying for the position. He has no dent or skeleton in his cupboard.

“His only sin is that he came from a poor background and by the grace of God married my daughter. Today, Action Alliance (AA) and APC have joined to form what is called perfect alliance.”