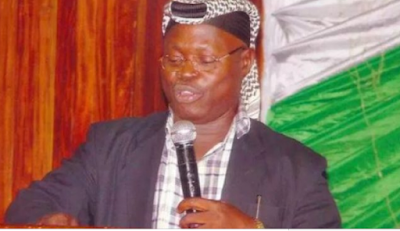 The Muslim Rights Concern, MURIC, has insisted that ballot box snatchers themselves are killers who deserve no mercy.

The group said this in reaction to President Muhammadu Buhari’s directive to security agencies to deal ruthlessly with ballot box snatchers ahead of the 2019 general election.

The President had, during the emergency caucus meeting of the All Progressives Congress, at the party’s Secretariat in Abuja said that ballot snatchers risk losing their lives.

Although a ‘tornado’ of criticisms has trailed President Buhari’s tough stand on ballot box snatchers, MURIC, has pitched camp with the President, saying that security agencies should be given the power to shoot anybody who attempts to snatch a ballot box.
The statement was signed by the founder and director of the organization, Professor Ishaq Akintola on Wednesday.

“Are we also not aware that many innocent voters have been killed and wounded in the process of ballot snatching? Are our elites not ashamed of defending such riff-raffs? Must we allow political differences to becloud our sense of decency? Do we know the sponsors of those thugs? These are crooked politicians who have nothing to deliver to the people except to steal public funds. No clean politician will ask hoodlums to snatch ballot boxes for him.

“We all read the confession of some of the armed robbers who killed several people in Offa recently. They said their godfather used to give them assignments during elections. He would ask them to invade polling booths where his opponents are most popular. What does that mean to the election process? It reduces the votes of the opposition. The wrong candidate will be declared winner. Consequently, he does what he likes because he never really felt any sense of responsibility to the people. Can we say such an election is free and fair?

“Nigerians have to make up their minds whether they want free and fair election or they want chaos, cheating, thuggery and hooliganism. We are shocked to our marrows that confusionists are allowed to sway the minds of rational people. How can any rational mind support electoral violence, particularly ballot snatching?

“Some critics hardly think before speaking. What is the difference between ballot box snatchers and armed robbers? The latter rob people of their hard-earned money. The former robs the people of good leadership. The victim of an armed robbery may be just one person but millions or thousands of Nigerians are the unwilling victims of a ballot box snatcher. Again, the victim of an armed robber may recover the financial loss within a few days or weeks but millions of Nigerians face untold suffering at least for the next four years when ballot boxes are snatched and thieves are declared winners of elections.

The group argued that President Buhari is not the first to call for action against hoodlums carrying illegal arms. It cited the examples of Chief Olusegun Obasanjo and Nyesome Wike, the governor of Rivers State.

It added, “We are surprised that people forget so easily. On November 25th, 1999, ex-president Olusegun Obasanjo said, ‘The police have instructions that any criminal should be shot on sight. Anyone who calls himself OPC should be arrested and if he doesn’t agree he will be shot on sight. We cannot allow this country to be overtaken by hoodlums and criminals. When people decide to behave like animals then they must be treated like animals.’

“It is also on record that Wike once said, ‘If you rig election or snatch ballot box in Rivers State you will die’. Ayodele Fayose was also quoted as threatening, ‘Anyone who brings his rigging madness to Ekiti State will not go home alive. He will die on the spot. In fact, Ado Ekiti will be on fire’. What moral right do such people have to criticize Buhari today for asking security agents to deal will ballot box snatchers? The truth is that Nigerians politicise everything.

“What Mr. President said is totally legitimate, lawful and constitutional. He has the full backing of Section 33(2)(a) of the 1999 Constitution of the Federal Republic of Nigeria which says inter alia, ‘A person shall not be regarded as having been deprived of his life in contravention of this section, if he dies as a result of the use, to such extent and in such circumstances as are permitted by law, of such force as is reasonably necessary – for the defence of any person from unlawful violence or for the defence of property.

“We need to ponder on the exact words of President Buhari. He said, ‘I want to warn anybody who thinks he has enough influence in his locality to lead a body of thugs to snatch ballot boxes or disturb the voting system, he will do it at the expense of his own life’. How can anybody have a problem with that? Are you a ballot box snatcher? Are you thinking of becoming one? Are you a sponsor of political thugs? Are you an advocate of electoral violence? What, therefore, is your problem?

“From the above facts, we are constrained to conclude that those who criticize President Buhari for giving orders to security agencies to shoot ballot box snatchers acted either in error, out of ignorance or as educated illiterates. A new Sheriff is in town. The old order changeth.