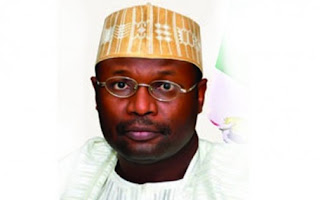 The Independent National Electoral Commission on Tuesday said it has achieved 95 per cent configuration of the Smart Card Readers to be deployed for the Presidential and National Assembly elections on Saturday.

Briefing newsmen on Tuesday in Abuja on the commission’s preparations for the postponed national elections, Chairman of INEC, Prof. Mahmood Yakubu, promised that the configuration of the card readers would be completed on Wednesday.

“You will recall in my last address to stakeholders on Saturday I mentioned that we intended to deploy card readers and we identified very clear timeline for the delivery of the card readers.

“I want to report that as of last night, we have achieved 95 per cent configuration of the 180,000 card readers and this process is going to be completed early morning on Wednesday, one day ahead of schedule.

“Because of the extension of state elections taking place on March 9, the commission hereby extends the campaign for that election to Thursday before the election date.

Yakubu also disclosed that as of 4pm on Monday, all issues related to the delivery of materials were identified and virtually addressed, saying ballot papers, result sheets and non-sensitive materials were now in locations across the 36 states of the Federation and the FCT.

He added that INEC state offices also commenced the process of inviting stakeholders to the Central Banks to examine the materials recalled from last week as well as to witness the departure of materials to Local Government Areas, which he said, would be completed today.

Yakubu added that the deployment of all materials to local governments and wards would take place on Wednesday and Thursday, adding that all the Registration Areas would be activated by Thursday.

The Chairman added that personnel and materials would also be at the Registration Areas by midday on Friday, while refresher training for ad hoc staff will take place on Friday.

“Personnel and materials must arrive at polling units latest 7am on Saturday and the opening of poll will take place by 8am on Saturday,’’ Yakubu assured.

He said that INEC was committed to free, fair and credible elections, saying the commission was working hard to ensure that the elections take place as scheduled.

He appealed for continued understanding by Nigerians and called on political parties to be mindful of their speech in order not to overheat the polity, saying that votes of Nigerians would determine the outcome of the elections.

Yakubu said that the over 4600 extra card readers mopped up from state to replace the ones burnt at INEC office in Anambra would not in any way affect the number of card readers needed for other states.

He also explained that no third party was involved in the configuration of the card readers, saying the management and configuration were being done by the commission’s ICT Department.

Yakubu also promised that the number of collected and uncollected Permanent Voter Cards would be made available on the commission’s website by Wednesday.