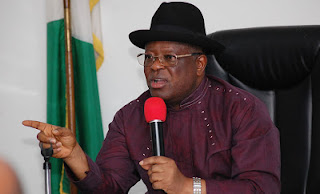 The Ebonyi State Government has said it will take all necessary steps to stop rumoured plan by the All Progressives Congress and security agencies in the state to rig the coming governorship poll against Governor David Umahi, even if it means dying to ensure fair process.

Reacting to the rumour that the major opposition party in the state had already written the election results, the state government said it would mobilise the masses to resist any form of rigging during the elections.

Ebonyi State Commissioner for Information and Orientation, Sen. Emmanuel Onwe, stated this on Monday during a world press conference in Abakaliki, the Ebonyi State capital.


“We heard that people have already written election results. It’s impossible here. You may write results elsewhere, not in Ebonyi State,” he said.

He added that he would renounce his Nigerian citizenship if the rumours about election results in the state turned out to be true, adding that it would mean that Nigeria was no longer fit for habitation by humans.

Onwe, who also doubles as the director, Media and Publicity of the Divine Mandate Campaign Organisation, which is the body spearheading Governor Umahi’s re-election bid, said the state government would assemble the people to rise against any plan to subvert the re-election bid of Umahi as the governor of the state.

The commissioner, who claimed there was no governor in the country that had performed like Umahi, stated that the greatest honour done to him by his principal was his appointment as the state’s image maker.

“We will wage a lawful resistance to thwart the democratic and transparent processes of the 2019 polls in the state by any institution of government.

“I challenge all political parties’ candidates contesting in the election with Umahi to present their agenda or records for public critique.

“We expect free and fair elections in Ebonyi State; we will monitor INEC and security agencies, every step on the way to ensure this purpose is achieved. We will die to prevent electoral fraud in Ebonyi State.”