We were on ground when opposition won in 2015, we’ll remain neutral again – Military 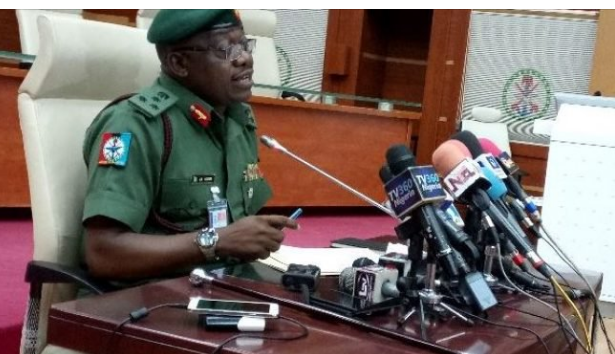 The Nigeria Military has reinstated its neutrality in the forthcoming general election.

The military said it belongs to no political party, whether ruling or opposition, adding that it was on ground and carried out its responsibilities during the 2015 presidential election when an opposition political party, the All Progressives Congress, APC, won a sitting President.

The military spoke through its Acting Director of Defence Information, Brig,-Gen. John Agim, in a press conference in Abuja on Thursday.

The military also said that it does not give ears to issues between political parties.

Asked whether the military was backing the ruling party to win the February 16 presidential election, Brig.-Gen. Agim, said, “A political party, the Peoples Democratic Party conducted the 2015 election and an opposition party won. The military was there.

“The military is going to do the same in 2019 which is to ensure that voters move freely to cast their votes. We have done it before. And if there’re issues among the political parties, that is not our responsibility and we don’t want to talk about that.

“Ours is that we have deployed our men to all over the country to make sure that there is no part of the country the citizens don’t cast the votes because of security issues.