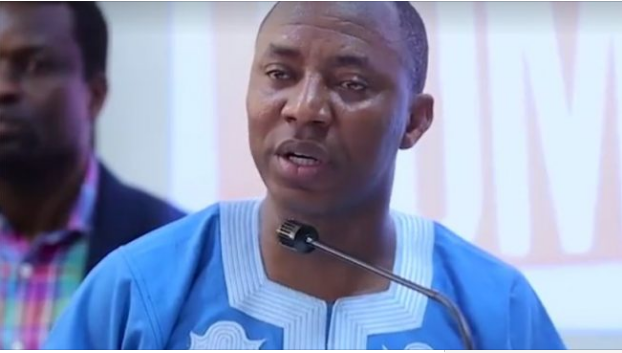 Recall that Soyinka had endorsed Moghalu, candidate of Young Progressive Party (YPP), saying the decision was reached after months of rigorous analyses.

However, Sowore said his team does not believe in the politics of godfatherism endorsements.

In a statement on Friday by Dr. Malcolm Fabiyi, Director-General of his presidential campaign, Sowore said the only opinions that matter are not those of privilege, power, status, or fame but that of the electorates.


The statement reads: “For the past year, Omoyele Sowore, leader of the Take it Back Movement and presidential candidate of the AAC has travelled across the 6 geopolitical zones, travelled to over 200 cities and towns within Nigeria, and engaged extensively with Nigerians at home and abroad to share his vision for birthing a vibrant and prosperous nation. Those consultations and engagements have created the broadest coalition of Nigerians that our nation has ever seen.

“On our platform, those previously considered inconsequential – the voiceless, the teeming poor and the forgotten youth – have found a voice and an outlet for the realisation of a nation that works for all of her people

“We have said from the beginning that we do not believe in the politics of godfathers, godmothers or endorsements. Indeed, we seek to create a nation where the only opinions that matters, and where the only voices of influence are not those of privilege, power, status, or fame. The only endorsement that matters to us is the one the Nigerian people have already given us. We are the voice of the Nigerian people, and the only organic platform that will represent the interest of the Nigerian masses.

“For the avoidance of doubt, there is no presidential candidate that can boast of the antecedents, the history of principled engagement, and the sacrificial participation in the struggle to move Nigeria forward that Omoyele Sowore has displayed over the last 30 years.

“From the fight to reverse the annulment of the June 12th 1993 elections, to the restoration of democracy in 1999, to the truncation of Obasanjo’s 3rd term bid, to the exposure of the Yar’Adua cabal’s bid to deny a constitutional transfer of power to a minority president, to the courageous real-time release of the 2015 poll results that helped to safeguard and ensure free and fair elections, Sowore has been at the forefront of pivotal political events of in country.

“We want to assure Nigerians that on February 16th, the African Action Congress will be on the ballot. On that day, Sowore and the AAC will get the only endorsement that matters when the Nigerian people vote to elect him as the next president of Nigeria. On February 16th 2019, the Nigwrian people will speak with one voice, and that onerous voice of reason will trounce the dictates of godfatherism.”