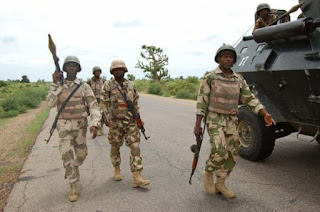 He said: “Troops of 192 Battalion of the Nigerian Army, Sector 1, Operation LAFIYA DOLE, while on patrol in conjunction with the Civilian JTF, along Gwoza-Yamteke on Wednesday 30th January 2019, came across some Boko Haram terrorists attempting to infiltrate the general area. On sighting the troops, the terrorists opened fire on them. which lead to a heavy exchange of fire.

“The gallant troops applied superior fighting skills and overpowered the terrorists and neutralised 4 Boko Haram terrorists including Adamu Rugu Rugu a very notorious terrorist, an indigene of Gwoza town, who had been troubling the law abiding citizens of Gwoza and its environment for many years. The gallant troops also recovered 2 Machine guns and 2 AK-47 rifles.”