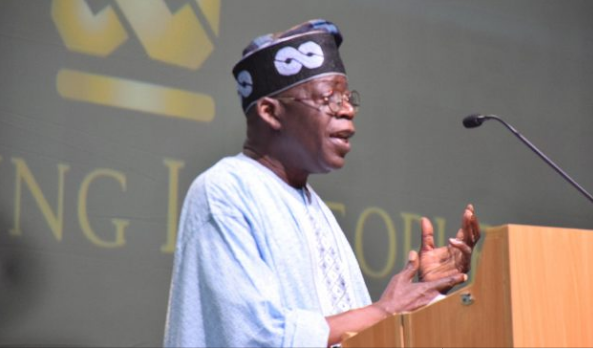 The National Leader of the All Progressives Congress, APC, Bola Tinubu, on Monday described the Senate President, Bukola Saraki, as a traitor and a backstabber.

Tinubu, who is a former governor of Lagos State, made the remark while speaking during the APC presidential campaign rally in Ilorin, Kwara State.

He also urged people of the state to vote out Saraki, who he described as an emperor.

According to him: “It’s been long they have been stealing your money and who has been doing it? it’s Bukola. We are here to fight Bukola, we are here to quarrel Bukola, he is a traitor and backstabber, we must not allow him steal our votes.

“This is the celebration of your freedom, the emperor that did exist here for several years now.”

Tinubu also lectured people of the state on how to vote out the Peoples Democratic Party, PDP, and Saraki.

“Use your index finger to thumb print and for women don’t apply ‘Larlie’ on your finger on that day because they will say you have voted.

“If you thump print and it doesn’t work, try again, insist on voting. Use your index finger touch the link then thumb print close to the broom on the ballot paper.

“I want to assure you that the incoming administration of President Muhammadu Buhari will be fair to us and ensure that your lives are changed,” Tinubu said.