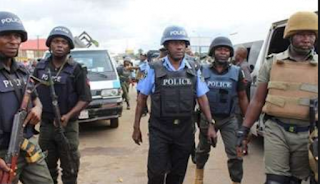 Three persons were yesterday feared killed and many others, including policemen, injured after violence broke out at Alaba Rago in Lagos State.

It was gathered that violence erupted at Okokomaiko before noon when some youths celebrated the victory of President Muhammadu Buhari in last Saturday’s election on the expressway.

Sources said the youths, armed with cutlasses and bottles, sang songs of victory from Alaba Rago and marched towards Okokomaiko, blocking the expressway and challenging other road users.

They were said to have resorted to violence at Okokomaiko, attacking traders and destroying their shops.

A woman, who identified herself as Blessing, said: “They came from Alaba Rago and were celebrating President Buhari’s victory. They shouted Sai Baba and marched towards Okokomaiko.

“When they got to Okokomaiko, they started destroying traders’ goods and this made them (traders) to run for fear.

“The hoodlums went to Okokomaiko Police Division and the officers tried to stop them, but they were violent. They attacked the officers and injured some of the policemen.

“We heard gunshots and later news started spreading that they killed one of the policemen. Parents ran to schools to take their children.

“Vehicles were not moving on this busy road because the youths also burnt tyres. It was terrible. Soldiers later came to restore peace.”

A meat seller, Sule, condemned the violence, saying it made it impossible for him to sell.

“I am from the North and those who caused this violence are also from the North. I have not sold anything since morning. What will I do with this meat now?” he said.

A motorcyclist said policemen arrested some people when they got to the scene. He, however, alleged that those arrested were innocent bystanders and not the perpetrators of the violence.

At the time of this report, policemen from the Rapid Response Squad (RRS), the Special Anti-Robbery Squad (SARS) and soldiers were still on the scene. An RRS helicopter was hovering over the area.

The police yesterday morning averted a clash between hoodlums on Lagos Island after a faction attempted to prevent traders from opening their shops.

The Nation learnt that hoodlums stormed Oluwole, Nnamdi Azikwe, Tinubu, Bamgbose and Alli streets around 9am, accusing traders of not voting for their candidates during last Saturday’s elections.

They were, however, confronted by another faction, who found their actions to be provocative.

Policemen from Area ‘A’ Command intervened to stem a potential crisis.

He confirmed that the hoodlums attacked police vehicles and injured personnel who attempted to take them off the highway.

Oti said: “Some youths blocked the highway and information was sent to the police. Policemen on traffic control duty were deployed and they tried to make them to leave the road, but they attacked the policemen. Some policemen sustained injuries. Reinforcement was dispatched to the scene and 37 persons were arrested. The investigation is on.

“There was no crisis on Lagos Island. What happened was that hoodlums were about to confront themselves and policemen were quickly deployed to avoid clash.”