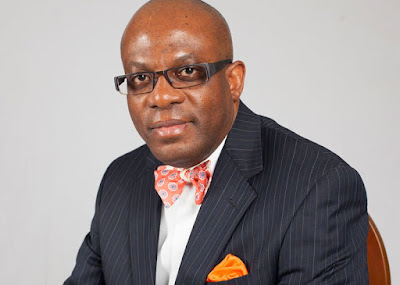 Usoro was first arraigned before Justice Muslim Hassan on a 10-count charge.

Usoro was to be re-arraigned before Justice Obiozor, but the judge recused himself for personal reasons.

“For personal reasons, I hereby disqualify myself from handling the case.

“I hereby return this file to the Chief Judge for reassignment to another judge,” Justice Obiozor ruled.

Prior to Usoro’s arraignment before Justice Hassan last December 18, his lead counsel Chief Wole Olanipekun (SAN), informed the judge of a December 17 letter to the Chief Judge seeking the transfer of the case to another judge for an undisclosed reason.

Olanipekun said Usoro would want the case transferred to either Uyo, the Akwa Ibom State capital, or Abuja.

He said if the case would remain in Lagos, it should be transferred to “any other honourable judge apart from my noble Lord.”

The Economic and Financial Crimes Commission (EFCC) alleged that the defendants committed the offence on May 14, 2016.

The commission alleged that Usoro conspired with others to commit the offence within the jurisdiction of the court.

He was alleged to have conspired to convert N1.4 billion, property of Akwa Ibom State Government, which sum they reasonably ought to have known formed part of the proceeds of an unlawful activity.

The prosecution said that the unlawful activity included criminal breach of trust which contravened sections 15 (2), 15(3), and 18 (A) of the Money Laundering (Prohibition) Act, 2011.