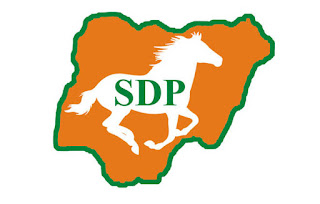 The Social Democratic Party (SDP), Adamawa chapter has distance self from the purported endorsement of President Muhammadu Buhari as its Presidential candidate for the upcoming general election, adding that it was not from them but from some factions who have been suspended from the party.

Chairman SDP state chapter, Honorable John Muva made this known to journalists on Friday at the SDP state secretariat.

He said SDP Adamawa chapter is not part of that endorsement and have not attended the meeting held in Abuja with regard to that, and therefore respect the rule of law and SDP constitution.

He reiterated that “the difference between Donald Duke and Jerry Gana cannot put Adamawa state in jeopardy and wish to state categorically that Adamawa state is not part of the endorsement.”

He added that the controversy was nothing but a mare purported story by some suspended faction members.

“I have received several calls from every nooks and cranny concerning the purported endorsement of President Muhammadu Buhari as the Presidential candidate of SDP”. He stated.

“Their concerned was who should we do, they are not saying Buhari is not capable neither Atiku nor any other Presidential candidate but because of the overwhelming support from the Adamawa state citizen, we are saying we are not part and parcel of this endorsement”.

“We do have some people whom we have suspended earlier than now from this party because of their anti-party activities. They are going round blackmailing this party that they are the people that have done such.”

“But I am telling you this that we have suspended them and not part of us.

Muva, therefore, call on the general public to disregard this claim and the suspended six others earlier than now.