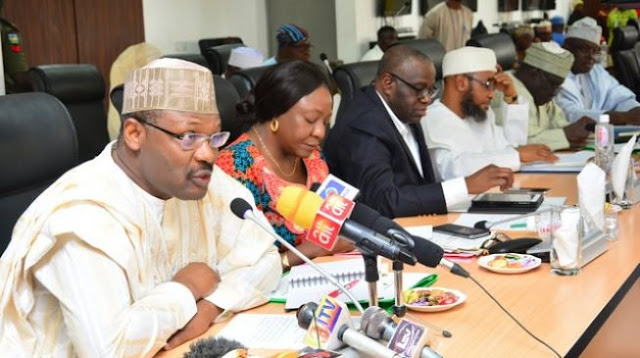 About thirteen hours ago, 1 conveyed to Nigerians the decision of the Independent National Electoral Commission (INEC) to reschedule the 2019 general elections by one week. Presidential and National Assembly earlier scheduled for 16‘“ February 2019 will now hold on Saturday 23″ February 2019 while Governorship, State Assembly and FCT Area Council elections scheduled for 2““ March 2019 will now hold on Saturday 9‘I March 2019.

The one-week adjustment was a painful one for [NEC but necessary in the overall interest of our democracy.

Nigerians will recall that when this Commission was appointed in November 2015, we promised Nigerians two cardinal things.

First, we shall work hard to consolidate the improvements made in the management of elections in Nigeria since 2011. Secondly. we shall always be open, transparent and responsive.

We have striven diligently to keep these promises in very trying circumstances.

In keeping with our promise to consolidate the gains of the last two electoral cycles, the Commission has conducted 195 rerun and off-season elections across the country since the last general elections.

Most of these elections have been generally adjudged to show progressive improvements in planning, execution and outcomes.

This commitment to continue to improve on election administration has informed our preparations for the 2019 general elections. Our goal is to plan carefully, execute meticulously and bring stability into election management in Nigeria.

Consequently, we announced fixed data for elections in Nigeria to the effect that Presidential and National Assembly elections will always hold on the third Saturday in February of an election year. while the Governorship and State Assembly elections follow two weeks later.

Having settled this, we began the planning quite early, with a Strategic Plan (SP), 3 Strategic Programme of Action (SPA) and an Election Project Plan (EPP). In fact, the plan for the 2019 general elections was ready in November 2017 and we subsequently issued the timetable and schedule of activities for the elections over one year ago on 9″I January 2018.

We carefully followed the timetable and implemented 13 of the 14 activities as scheduled. We kept to the time-frame and have not missed the date fixed for any single activity.

In preparing for the 2019 general elections, we have come face-to-face with the realities of conducting such an extensive national deployment of men and materials in a developing country like ours.

It is said that elections constitute the most extensive mobilization of men and materials that any country could undertake in peacetime.

The challenges of doing so, even under the best of circumstances, are enormous. Within a period of 16 months, we registered over 14 million Nigerians as new voters, collecting their names, addresses, photographs and their entire ten fingerprints. Beyond that, we prepared, printed and delivered their permanent voter’s cards for collection. I should note that of the 14.28 million Permanent Voters’ Cards (PVCs) made available for collection, about 10.87 million or 76.12% have been collected.

It is often not appreciated the magnitude of activities that the Commission undertakes during general elections. Not only we have recruited and trained about 1 million young people to serve as ad hoc staff, the magnitude of materials mobilized for our elections, is enormous.

For instance, the Commission has printed 421.7 million ballot papers for six scheduled elections, as well as 13.6 million leaves of result forms for the Presidential election alone.

Indeed, managing 91 political parties and 23,316 candidates for whom votes will be cast in 119,973 polling units by over 84 million voters is certainly astounding. No doubt. preparations for the 2019 general elections have been extremely tasking for the Commission.

It is therefore not unexpected that such a tremendous national mobilization of men and materials will encounter operational challenges and we have had our own fair share of such challenges.

There have been delays in delivering ballot papers and result sheets for the elections which are not unusual. However, I must emphasize that all the ballot papers and result sheets were ready before the elections despite the very tight legal time-frame for finalizing nomination of candidates and dealing with the spate of legal challenges that accompany it.

In this regard, the Commission has been sued or joined in over 640 court cases arising from the nomination of candidates. As at today, there are 40 different court orders against the Commission on whether to add or drop candidates.

The net effect of these is that there is usually roughly a one-month window for the Commission to print ballot papers and result sheets and either fly or transport them to several destinations until they finally get to each polling unit.

Unfortunately, in the last week, flights within the country have been adversely affected by bad weather. For instance, three days ago, we were unable to deliver materials to some locations due to bad weather.

We therefore had to rely on slow-moving long haulage vehicles to locations that can be serviced by air in spite of the fact that we created five zonal airport hubs Abuja (North Central), Port Harcourt (South-South and South East), Kano (North West), Maiduguri and Yale (North East) and Lagos (South West) to facilitate the delivery of electoral logistics.

In all three cases. serious disruptions were occasioned by the fire, further diverting our attention from regular preparations to recovery from the impact of the incidents. In lsiala Ngwa South, hundreds of PVCs were burnt, necessitating the recompiling of the affected cards and reprinting in time to ensure that the affected voters are not disenfranchised. I am glad that all the cards were quickly reprinted and made available for collection by their owners.

ln Qu’an Pan Local Government Area. our entire office was razed, destroying all the materials prepared for the elections printed register of voters, ballot boxes, voting cubicles and several electricity generating sets. ll Registration Areas and over IOO polling units were affected by the fire. We recovered quickly and have since replaced everything destroyed. In addition, we secured a suitable building from which to conduct the elections.

Perhaps the most serious was the fire incident in our Anambra State Office at Awka, which destroyed over 4,600 Smart Card Readers being prepared for the elections. These Card Readers take at least six months to procure.

Despite this setback, we have practically recovered from this by mopping up every available spare SCR across the country and within 24 hours delivered them for elections to hold in Anambra State.

All these challenges mean that then: have been differences in preparations from one State to another. Our overall assessment is that if the elections went on as planned, polls will not open at 8am in all polling units nationwide. Yet, we are determined that polls must hold at the same time everywhere in the country.

In this way, elections will not be staggered. This is very important to the public perception of elections as free. fair and credible. We promised Nigerians that we shall be open. transparent and responsive.

Faced with these challenges, we initially thought that we only require a maximum of 24 hours to resolve the logistics issues involved and complete our deployment for the election.

This would mean shifting the elections to commence on Sunday 17th February 2019. However, given the restriction of movement during elections, that could affect many votes who worship on Sundays.

While the Commission was considering the following Monday 18th February 2019 as an option, our LCT Department advised us that it would require 5 -6 days to reconfigure about 180,000 Smart Card Readers earlier programmed to work only on election day Saturday 16th February 2019.

It is for this reason that the Commission decided to adjust the election dates to Saturday 23rd February 2019 for Presidential and National Assembly elections and a consequential adjustment of Governorship, State Assembly and FCT Area Council elections to Saturday 9th March 2019.

In the next few days, the Commission will work on the basis of the following plan:

3. Receipt and Deployment of sensitive Wednesday 20 and materials to LGAs Thursday, 21st February, 2019


I want to appeal to Nigerians and all other stakeholders for their understanding of what has been a very difficult decision for the Commission. But we believe that ultimately this is for the good of our democracy and country. I wish to assure you of our commitment to free, fair and credible elections.

As Chairman of INEC, and on behalf of the Commission, we take full responsibility for what happened and we regret any inconvenience our decision might have caused.

Thank you and God bless”.