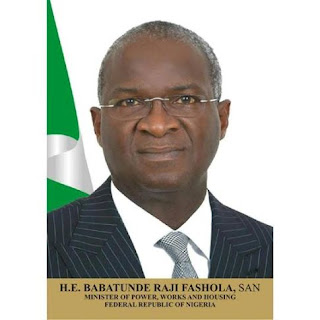 The Minister of Power, Works and Housing, Babatunde Fashola, has stated that power generation in Nigeria increased by 100 per cent within a space of three years.

Fashola, who disclosed this while playing host to members of the Federation of Construction Industry in his office on Monday in Abuja, specifically stated that power generation increased from 4,000 megawatts in 2015 to 8,000MW in 2018.

This, however, was different from the latest power generation figures obtained from the Transmission Company of Nigeria on Monday, as the TCN stated that peak generation attained on February 3, 2019, was 4,976MW.

It also stated that the peak average energy ever sent out was 4,557MWH/H and that this was recorded on February 2, 2016.

TCN further stated that the peak power generation ever attained was 5,222MW, adding that the figure was recorded on December 18, 2017.

But Fashola, in a statement issued by the FMPWH on Monday, told his guests that Nigerians now spent less on fuelling of generators and plants because of frequent and improved electricity supply nationwide.

The minister said the government was committed to renewing and expanding the Nigerian economy through the provision of critical infrastructure.

He explained that the ministry was almost completing 34 pilot national housing programmes in the states that had provided land for the take-off of the programme, adding that the rehabilitation and reconstruction of federal secretariats were ongoing in Bayelsa, Anambra, Zamfara and Nasarawa states.

Fashola told the FOCI members that the Federal Government recognised the efforts of the association in helping to galvanise the quarry and mining industry due to the volume of construction going on in the built environment and the road sector.

Fashola was quoted in the statement as saying, “When I first met you, there were complaints of non-payment for three to four years before the coming of this administration.

“But I can confidently say there is not one year since the beginning of this administration that contractors have not been paid; the money move round the economy.”

Fashola also explained that Executive Order 5 sought to achieve local participation for Nigerians and Nigerian companies, as the ministry was already compiling the list of Nigerians working on project sites.

He further explained that the recent Executive Order 7 signed by the President would ensure industrialisation, adding that it would expand construction work and manufacturing jobs.

The Director-General, FOCI, who led the delegation, Olubunmi Adekoje, appreciated the ministry for the support given to the association and the timely intervention in the area of finance to boost the activities of the industry.