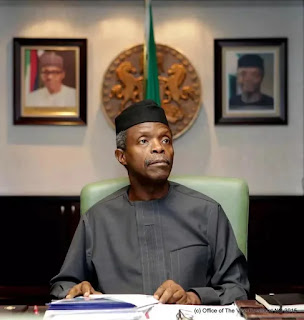 Vice President Yemi Osinbajo on Tuesday met with Senator Kabir Marafa to broker peace between the two factions in the All Progressives Congress (APC) in Zamfara State.

The APC in Zamfara State has been embroiled in a dispute over the party’s primaries in the state, which led to uncertainties over participation of the party’s candidates in governorship, national assembly and state assembly elections.

Marafa disclosed that discussions at the meeting focused on the political impasse in the state.

“I am here because of that, because of the logjam.  The vice president is concerned that the problem still lingers.

“He regretted that the problem has persisted because it is a family problem and he promised to do the needful.  We will tap from his years of experience and wisdom.”

According to him, he had a fruitful discussion with the vice president, who made a proposal that would lead to the resolution of the dispute.

He said the proposal would be discussed with his followers before he would give a feedback to the vice president.

“Our discussion was quite fruitful; it was an honest discussion.

“He is a good man and he gave out a proposal, which we are going to look at.

“We are not alone in the journey.  We have followers and friends.  We are going to look at it and I promise him that I will get back to him today or tomorrow. “

Read Also: Buhari/Osinbajo get second term nod
Mararafa said the postponement of the presidential and national assembly elections from February 16 to February 23 was an advantage to the Zamfara APC.

“Naturally, it not because of the postponement I wouldn’t have been here today.

“So, it goes without saying that it is an advantage.

“If the election had taken place last Saturday, there would be anything to discuss.

“So it is an understatement to say that it is an advantage to Zamfara State.

“So, for whatever it is, it definitely gives Zamfara State some five more days within which to work out something,” Senator Marafa said.