Onnoghen is a liar, even Dangote can’t forget $1m in his account — el-Rufai 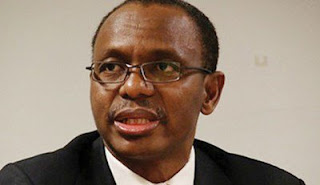 He gave the advice when members of Coalition of Civil Society Organisations in the state took their protest to the Government House in Kaduna.

El-Rufai, who received the protesters’ solidarity letter to President Muhammadu Buhari on the suspension of the CJN, said with just over 20 years in public service, Justice Onnoghen possibly has more money than Aliko Dangote, the richest African.

According to him, the suspension of Onnoghen was in order, saying that even Dangote cannot forget one million dollars in his bank account.

“The case of Justice Onnoghen is the case in which somebody who has worked in government for past 20 years suddenly has millions of dollars in his account.


“He has admitted, but says he has forgotten about them.

“I can assure you that the message you have given to me will be delivered to the president today.

“The case with Justice Onnoghen is a very sad one. Othman Dan Fodio, the founder of the Sokoto Caliphate, wrote that the worst form of corruption you can find in any public service is judicial corruption.

“The president did the right thing by asking him to step aside pending investigation. It is the proper thing to do. It is what is done in every organised and civilised society.

“Unfortunately, some people in Nigeria are trying to make white black and black white. They are using technicalities to delay bringing this man to Justice.

“Mr President did not remove Onnoghen from office. He said in honour of the Judiciary, he should step aside so that the charges against him can be investigated and prosecuted,” the governor said.

Leaders of the Civil Society organisations, Messrs Zubairu Muktar and Abubakar Abubakar, said all well-meaning and focused Nigerians interested in the progress of the country must continue to support the anti-corruption war of this administration.

They commended Buhari for taking the decisive step to restore the lost glory of the judiciary by rejuvenating our nascent democracy.

“It is indeed a step very timely and commendable,’’ Muktar said.

“As a coalition of more than 150 CSOs, we wish to convey to our President that we will continue to stand firm, straight and tall with him as he continues to purge out corruption embedded in the Nigerian system which has become a hindrance to the economic, political and social development of our dear nation,’’ he added.