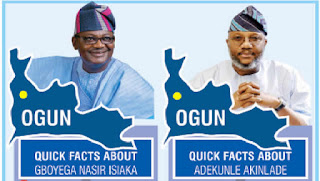 The 2019  governorship election in Ogun State, unlike previous polls,  seems to be unpredictable.  During 1979 and 1983 elections, the Unity Party of Nigeria held sway in the state. Then, the results of the polls did not surprise many because the leader of the party, Chief Obafemi Awolowo, who bestrode Nigerian politics like a colossus, hailed from the state.

During the endless transition of the military dictator, Gen. Ibrahim Babangida, Ogun State people voted mostly for the Social Democratic Party, which produced the winner of the 1993  presidential election,  the late Chief Moshood Abiola, an indigene of  the state

Since Nigeria’s return to democracy in 1999, Ogun State has been governed by Chief Olusegun Osoba (from Ogun Central) of the Alliance for Democracy; Otunba Gbenga Daniel  (Ogun East) of the Peoples Democratic Party; and the incumbent, Senator Ibukunle Amosun (Ogun Central). Since its creation in 1976, the state has not been governed by a Yewa/Awori indigene (Ogun West).

Amosun has not hidden his preference for a member of the House of Representatives, Adekunle Akinlade, as his successor. The lawmaker,  who could not pick the governorship ticket of the All Progressives Congress, has defected to the Allied Peoples Movement, where he is contesting the seat.

A businessman from Iperu-Remo, Prince Dapo Abiodun, is the governorship candidate of the APC. Other candidates include Gboyega Isiaka of the African Democratic Congress and a former Speaker of the House of Representatives, Dimeji Bankole.

Isiaka, who hails from Ogun West has the support of Obasanjo, many traditional rulers and some of the elite in the state. This year ’s governorship poll is the third he is contesting. For him not to fail again, he must garner enough votes from his people in Ogun West and two other zones – Ogun Central and Ogun East.

Like Isiaka,  Amosun’s preferred candidate, Akinlade,  hails from Ogun West. Akinlade has embarked on massive campaigns across the state. In Ogun East,  Isiaka and Akinlade will have to contend with Abiodun and the PDP governorship candidate,  Buruji Kashamu,

For Abiodun, the APC crisis in the state is a hurdle he must cross before getting to the Oke Igbehin Government House. Amosun was reported to have vowed that Abiodun would not succeed him, but what the oil tycoon could not get from the governor, he found in the APC chieftains including Vice-President Yemi Osinbajo,  Asiwaju Bola Tinubu and Osoba.

Abiodun, who is still battling with a court case on his academic qualifications may benefit from the crisis in the state PDP as two personalities fighting over the opposition party’s ticket are from Ogun East, which is also yearning for the governorship seat. The APC candidate cannot do without the support of two others zones.

In the PDP, while the Independent National Electoral Commission recognises Kashamu, the opposition party insists on Oladipo Adebutu as its candidate.  On March 2 when the electorate in Ogun State elect their governor, Osinbajo, Obasanjo and others will engage in a test of strength.