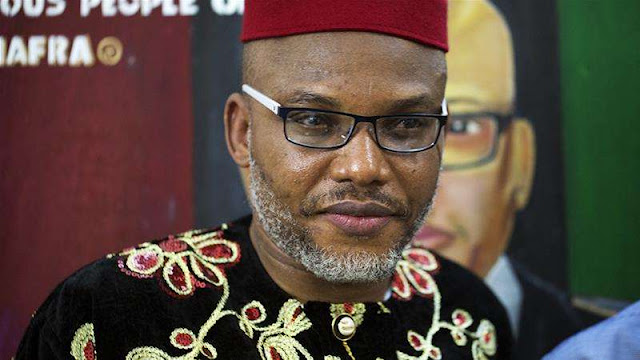 Nnamdi Kanu, leader of the Indigenous People of Biafra (IPOB), says former Vice-President Atiku Abubakar is originally from Cameroon and became Nigerian only through a referendum.

Kanu said this on Saturday during a “special broadcast” on Radio Biafra, according to a statement from Emma Powerful, IPOB spokesman.

He was speaking on the need for a referendum on IPOB’s quest for a sovereign state of Biafra, and on boycott of the upcoming elections to achieve this.

According to Kanu, Atiku is from former Sarduana province of Cameroon that later joined Nigeria through a referendum.
“Time and again, boycott, historically has proven to be a necessary tool of both active and passive resistance,” he said.

“I need not mention other nations, which in the recent past, had applied boycott as a means to expressing and achieving their demands for freedom.

“Nigeria’s experience with election boycott in 1964 tells the same story but they have banned history and thus won’t teach you that in schools. They won’t tell you that Chief Obafemi Awolowo used boycott of elections to achieve his goal in the west.

“They also won’t tell you that it’s referendum (called a plebiscite in this case) that brought about the creation of an autonomous mid-west region of Nigeria in 1963, and before then – the unification of the former Sarduana province of Cameroon (where Atiku came from) with Nigeria, and part of southeastern Nigeria joined Cameroon.

“All through a referendum, and heavens did not fall. It was that referendum in the north-east that enabled Atiku Abubakar to become a Nigeria otherwise he would be a Cameroonian today.

“Why is it that the same process that made it possible for Atiku to become a Nigerian instead of a Cameroonian cannot be extended to me as a Biafran?”

Kanu added that the Igbo boycotting the general election “is an indirect referendum and therefore should be considered a major assignment between now and the night of February, 16th 2019.”

Kanu had alleged that a clone he referred to as Jubril from Sudan is the one in charge of Nigeria, not President Muhammadu Buhari.

Weeks after the rumor went viral, Buhari dismissed it, saying he is in control of the country.