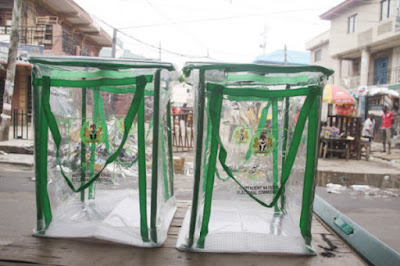 How much could Nigeria have lost to the unexpected postponement of the Presidential and National Assembly elections?

Although, we may never have an accurate figure, the millions of Nigerian traders, artisans, farmers and motorists who had to stay at home yesterday doing nothing are already counting their losses on account of the polls shift.

Ejinkeonye, who is also the Director, Business Development for Africa, Esilknet Africa Network Ltd., told News Agency of Nigeria (NAN) yesterday in Abuja that the postponement would affect the economy adversely.

“It is quite unfortunate that the election was postponed. Economically, billions of naira have been lost and will be lost in the coming weeks. Industries, businesses, including airlines, were affected by the movement restriction.


“We expect also the same thing happening in the coming weeks. Most important effect is the perception of the international financial community.

“Situations like this will create panic with massive withdrawal and stoppage of funds inflow to Nigeria. I dread the effects in the stock market on Monday,” he said.

Ejinkeonye, who said that it would be difficult to determine the actual figure of the loss but would be in billions of naira, said however that the real cost would be the loss of investor confidence.

Also speaking, the President, National Association of Nigerian Traders (NANTs), Mr. Ken Ukaoha, said the country would lose more than N140 billion due to the postponement.

Ukaoha noted that the postponement would affect the economy adversely in terms of money that the government, political parties and ordinary Nigerians had already expended on logistics and otherwise.

He described the election postponement as appalling and unfortunate which could make the nation become a laughing stock among the comity of nations.

“I am telling you that with this calculation I have just done here, we are losing nothing less than 140 billion naira, because we all got this information so late

“If you go round now, you will see that the shops are closed, so we are losing a lot of money just for this incident.

“We are not talking about the manufacturers and the industrialists because they have all sent their workers away to go and perform their civic duty.

“Farmers did not go to their farms because they want to exercise their franchise. If you do the computation, your guess is as good as mine in terms of what the nation is losing, we should learn.”

An economist, Mr. Chijioke Ekechukwu, believes the postponement of the elections will affect credit rating and already threatened portfolio investments in the country.

Ekechukwu noted that the investments would likely flow out in large value.

According to him, beginning from Feb. 16, the stock market will go bearish due to the postponement.

“What will the international observers who already had their return tickets for Monday or Tuesday do after the failed election.

“They will indeed fly back and not come back as they didn’t budget for any extra cost and extra stay.

“What will happen to school children who are at home presently because of the election.’’

Ekechukwu expressed worry that Nigerians would be made to bear the losses.

He said: “They have thwarted all my plans. Things I was supposed to have done on Friday, I had to shelve them so that I could be around for the elections. Now, they want me to incur losses again next week?

“It continues to baffle me why a country that has spent so much preparing for this election will at the last minute cancel it. Considering all the monumental sums that have been given to INEC, what is the issue of logistics here?

A tomato seller at Mile 12 market lamented low patronage, stating that most of their customers had either travelled for the polls or were scared to come out.

She said: “You can see how everywhere is still empty. A lot of people travelled to their villages to vote. They should have made this announcement some days back so that people would not travel. Now, they have made us to lose money and next Saturday we will not sell. They should be considering the sufferings of ordinary Nigerians before taking such decisions,” she said.

Island Club Manager, Olubunmi Fasan, said: “ a lot of economic gains that would have accrued if today had not been chosen earlier could not be achieved.

“A lot of people had their occasions cancelled, students came back from school, foreign delegates who travelled to Nigeria to monitor the conduct of the election are now forced to stay back or go back to their base to come back next week for the same exercise.”

Food vendors in Edo State were hard hit by the postponement.

Some of them had already arrived polling centres as early as 6 a.m. with cooked food to sell only to be told that the elections had been shifted by a week.

One Mrs. Theresa Igbinosa, a food vendor at Western Boys High School in Ikpoba-Okha ward 2, said she spent about N50,000 to prepare the food.

“I am not only sad but very angry. I spent so much money and woke up as early as 2 a.m. to prepare this food. I have not even slept at all,” she said.

“My problem now is what to do with the food because nobody is here to sell to and I am so confused right now. I even borrowed the money from my neighbour with a promise to pay back after sales.

“INEC is not fair to us at all. Why did they have to wait till this morning to cancel the elections?”

Osifo Lucky, another food vendor, said, “there is no hope for the poor in the country. Nobody puts you into consideration before taking any decision. They just wake up and do whatever that pleases them.

“As you can see for yourself, I am looking at my food and the food is looking at me too. No buyer; the school is empty.”

A Kano resident, Madam Martha Moses was full of pity for one of her friends, who according to her, had to reschedule the marriage of her son from yesterday to Saturday, February 23, the new date picked by INEC for the postponed elections.

“You can see this kind of situation, where parents have committed a lot of money to prepare for the wedding.

“Now, the wedding cannot even take place on February 23. This is a shame, as we have lost a lot of money to the inefficiency of INEC leadership to organise this election.”

Commercial activities in most parts of Lagos were dull for much of yesterday.

Most markets and petrol stations remained shut until late in the day while vehicular traffic was very low.

Patronage at some of the markets in Umuahia and Aba, including Ubani Market, Ariaria, Eziukwu and Ahia Ohuru was very low.

Apart from engaging in panic purchase of food stuff and unsolicited withdrawal of money through ATM, a number of non-natives resident in the state had travelled to their various home states for fear of the unknown.

Speaking to our reporter, cross-section of residents condemned the postponement, citing its economic implication on the part of the citizens and the federal government.

According to Chief John Ikuku, “the postponement of this election is totally unnecessary. How can INEC suddenly wake up from slumber and said it was no longer ready enough to conduct the elections when sensitive materials have already been distributed across the nooks and crannies of the country?

“Look, my brother, I have never witnessed this kind of scenario and I don’t think it has happened this way anywhere in the world. I have a feeling that this could be a ploy to rig the election.”

Madam Martha Moses said, “I am disappointed with INEC. I think they are not serious, despite all encouragement and support given to them by the federal government to conduct the election. More so, despite assurances from INEC leadership, they came at this 11th hour with this laughable postponement without recourse to the negative effects and consequences upon the average Nigerian.

“INEC leadership has totally lost credibility and the chairman should resign in shame because he has failed Nigerians, and I don’t think he can ever get it right.”

Madam Martha added that, “the most painful aspect of it is that a friend of mine is to wed today, but the wedding was put off and slated for February 23. You can see this kind of situation, where the parents have committed a lot of money to prepare for the wedding.

“Now, the wedding will not hold next week. As such, this is a shame on the part of INEC as we have lost a lot of money due to the inefficiency of INEC leadership to organise this election.”

The Nation reports that INEC in Kano has started retrieving sensitive materials conveyed to various Local Government Areas for onward deposit to the Central Bank of Nigeria for safety.

Kano remains calm and quiet as at the time of filling this report, as everyone is moving about their businesses unhindered.

Security operatives were however sighted at strategic positions, performing their normal duties.

Speaking to our reporter, the spokesman of Kano State Police Command, Haruna Abdullahi, said there was no cause for alarm as police is on top of the situation.

He urged residents to remain law-abiding and go about their normal businesses without fear.

The postponement of the Presidential and National Assembly elections has left a bride-to- be in a dilemma as the Independent National Electoral Commission’s (INEC) timetable has disrupted her marriage plan for a second time.

Miss Rita Osawende’s wedding was originally fixed for yesterday but was unexpectedly re-scheduled for Saturday, February 23, the same date she had picked because of the earlier clash of date.

Osawende told the News Agency of Nigeria (NAN) in Benin that all arrangements for her big day had been concluded for February only for INEC to upset her plan again.

“INEC please help me revisit this issue,” she said.

“The original date was fixed for February 16, but as soon as I knew its elections day, it was postponed to February 23rd.

“What do I do? All arrangements have been made.

“I have printed and distributed my invitation cards for the wedding. I am so confused,” NAN quoted her as saying.