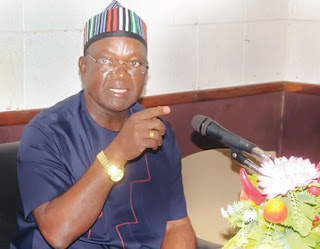 Governor Samuel Ortom of Benue State has taken a swipe on his counterpart in Plateau state, saying, “Governor Simon Lalong is very shameless not to stand with his people.”

Ortom made the remark in an interview with newsmen in Makurdi while reacting to comments by Lalong that he (Ortom) was hiding under farmers-herders crisis following his inability to promptly pay the state workers’ salaries.

Lalong had on Wednesday at the APC presidential rally in Makurdi accused his Benue colleague of under performance in his almost four years in office as well as implying that he (Ortom) was using herders-farmers crisis as a smokescreen to cover up his administration’s inefficiency.

But, Ortom in his swift reply, said, “it is unfortunate that Lalong has sold himself out. For me, I’m not prepared to talk about him. All I know is that I’m doing what my people want.

The governor further denied the allegation that he was using the farmers-herders crises to project himself as he wondered how a government would allow herders to continue open grazing after the law was enacted.

“I will continue to defend my people. I’m not Lalong to abandon my people to be killed and won’t say anything. Even now, are killings not going on? Lalong is very shameless by not standing with his people who elected him. I prefer to stand with my people even if I’m not the governor,” Ortom emphasised.