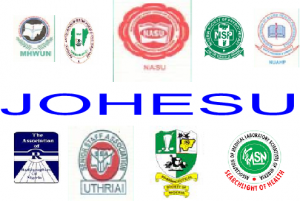 The Joint Health Sector Union (JOHESU) on Monday gave the federal government a seven-day ultimatum to meets its demands.

The union said it would occupy the Federal Ministry of Health for days and thereafter proceed on industrial action if the government does not accede to its demands.

Speaking during a rally organised by the union in collaboration with the Nigeria Labour Congress (NLC) and the Trade Union Congress (TUC) in Abuja, President of the union, Comrade Josiah Biobelemoye said the union wanted to proceed on industrial action after the federal government failed to meet its demand following the ultimatum that ended on 31st January.

He said the union decided not to do so for now because of the effects it would have on Nigerians, and because some clergymen last weekend mediated and appealed to the union not to proceed on strike yet.

President of the Nigeria Labour Congress (NLC), Ayuba Wabba decried the discriminatory practices against health workers in the country saying that for peace to reign in the sector, there must be justice.