I won’t lose, I will congratulate myself at the end of this election - Buhari boasts 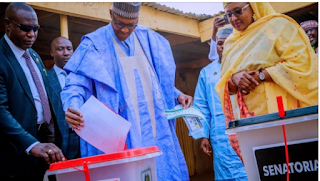 Clad in a light blue “Babbar Riga”, a native attire, the president was accompanied by Aisha, his wife, and some of his aides.

He expressed satisfaction with the conduct of the exercise, saying: “So far, so good. Nigerians understand and are behaving themselves.’’

According to figures released by the Independent National Electoral Commission (INEC), Katsina recorded the highest number of permanent voter cards (PVC) collection in the country.

Of the 3,230,230 registered voters, 3,187,988 picked up their PVCs. The presidential and national assembly elections are taking place all over the country.

There has been an impressive turnout of voters with complaints of late arrival of electoral officials in some areas.

Atiku Abubakar of the Peoples Democratic Party (PDP) is Buhari’s main challenger in the election. He is expected to vote at Ajiya 012 polling unit, Yola in Adamawa state.