I will reclaim my stolen mandate – Atiku 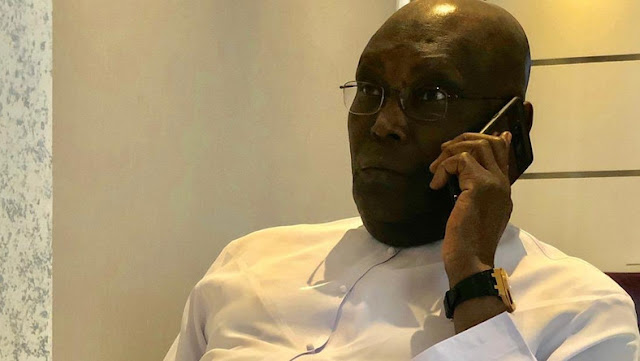 The presidential candidate of the Peoples Democratic Party in the February 23 presidential election, Atiku Abubakar, on Wednesday said he would reclaim his ‘stolen’ mandate.

Speaking during a world press conference in Abuja, he said the result of the election announced by the Independent National Electoral Commission did not reflect the wishes of Nigerians and the votes of the electorate.


He said the election was the worst in 30 years, adding that he was consulting not only with his party members but other relevant stakeholders on his next line of action.

The former Vice-President thanked Nigerians for choosing democracy as a system of government.

He stated that democracy would be the government of the people and by the people only when the people’s choice prevailed.

According to him, that did not happen on Saturday.


He accused the Muhammadu Buhari administration of perpetuating electoral fraud.

He said, “On election day, we saw the implementation of grand theft of the people’s will. I am not one for hyperbole, so I will just let the facts speak for themselves.

“In Akwa Ibom State for instance, the result showed a statistical impossibility of a 62 per cent drop in voter numbers from the 2015 election even where voter registration and permanent voter cards collection rate were much higher in 2015. This is why voter suppression took place.

“You must recall, our party made this observation and complaint before the elections, that there were plans to implement voter suppression on the PDP or opposition’s strongholds and voter increase in the All Progressives Congress’ strongholds. This pattern was repeated in strongholds of the PDP including states like Delta, Rivers, Abia and Benue.

“As this was occurring, we saw another statistical impossibility where the real numbers did not tally but increased astronomically in Borno State by an almost miraculous 82 per cent in the midst of insecurity.

“This pattern was also repeated in other strongholds of the APC states.

One begins to ask if insecurity is conducive to higher voter turnout and security is antithetical to high voter turnout. It is further curious that the PDP’s margin of victory in states outside the South-East and South-South was extremely slim across the board. That again is a statistical impossibility.

“The fact is that when you calmly look at the numbers declared by INEC as results of the February 23, 2019 elections, they do not add up at all.

Let me say that I am not speaking as a member of the PDP, I am speaking as a Nigerian when I said the electoral fraud perpetuated by the Buhari administration this past Saturday cannot produce a government of the people for the simple reason that it does not reflect the will of the Nigerian people.

“My dear Nigerians, it is for this reason that I, Atiku Abubakar, reject the result declared by INEC which declared Muhammadu Buhari as duly returned by the majority of the lawful votes. I am conferring with not just my party but also the Nigerian people on the next step which will be revealed to the public shortly.”

Atiku appealed to the disillusioned and angry Nigerians, who he said, were let down by the process, to remain calm and steadfast, as according to him, “Rome was not built in a day.”

He said the PDP had the real figures and the facts, which, he said, had spoken so loudly on Saturday.

Atiku said, “As I have always said, this year is my three decades in Nigeria’s struggle for democracy. And this is the worst election in those 30 years. I told Gen Abdulsalami (Abubakar) two nights ago when he called me that not even the military conducted such a bad election.”

He also told his supporters and the PDP members not to be discouraged, adding that they would triumph in the end.

“This is a long journey but I am confident of victory. All hope is not lost, stay strong. By the grace of God, we shall triumph.”

He urged the international investors and friends of Nigeria who were to pull out of the country, not to do so.

Atiku, who claimed that the stock market lost N85bn on Tuesday, pleaded with investors to be patient and keep faith with the Nigerian people.

He said, “Your problem is not with the Nigerian people, your quarrel is with those who stole their mandate. Please do not punish the people by divesting from Nigeria.”

Why I won’t congratulate President – Atiku

Atiku said he would not congratulate the President because the election was not free and fair but marred by many irregularities.

The former Vice President therefore said that he would challenge the outcome in court.

Recall that the Chairman of the Independent National Electoral Commission, Prof Mahmood Yakubu, on Wednesday morning declared President Buhari of the All Progressives Congress as winner of the election, having scored 15,191, 847,while Atiku polled 11,262,978 votes.