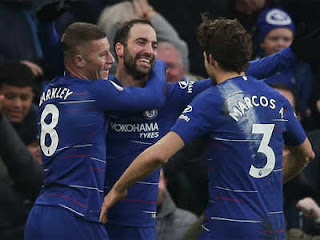 Gonzalo Higuain eased the pressure on Maurizio Sarri as the Chelsea striker’s first goals for his new club inspired a 5-0 demolition of Huddersfield on Saturday.

Blues boss Sarri had been under fire after Chelsea suffered their heaviest Premier League defeat for 23 years in a humiliating 4-0 loss at Bournemouth on Wednesday.

Amid reports the Italian is already in danger of the sack less than a year after taking charge, he was indebted to his old friend Higuain for lifting the gloom around Stamford Bridge.

Higuain, signed on loan from Juventus at Sarri’s behest after their successful spell together at Napoli, opened his account early in the first half of Chelsea’s biggest win of the season.

It was the start of an influential display from the Argentine and, with Eden Hazard free to return to his preferred role on the flanks after a spell up front, Chelsea looked far more vibrant.

That welcome piece of good fortune for Sarri was followed by further goals for Hazard, Higuain and David Luiz after the interval as Chelsea ended a run of two successive league defeats in emphatic fashion.

After winning for only the second time in their last five league matches, Chelsea climb back into fourth place above Arsenal, who trail by three points and face Manchester City on Sunday, as they battle to qualify for the Champions League.

While Chelsea’s winter of discontent won’t seem so bleak for Sarri now, the Blues remain at a crossroads.

Much sterner tests await than Huddersfield, who are rooted to the bottom of the table and look destined for relegation after the 11th defeat in their last 12 league games.

Chelsea faces a season-defining period that includes the League Cup final against Manchester City and meetings with Manchester United in the FA Cup and City and Tottenham in the league.

Sarri hasn’t helped his cause with rigid tactics and dubious man-management — conducting a long inquest with his players after the Bournemouth mauling and claiming they don’t understand even the basics of his system.

The 60-year-old is adamant his philosophy will work if he is given time.

But for ‘Sarri-ball’ to succeed, he needs Higuain to hit the ground running.