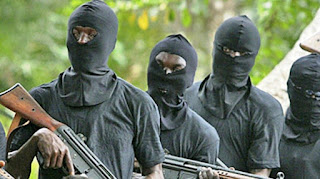 A group of masked gunmen, on Wednesday, kidnapped 10 passengers and the driver of a white Toyota Sienna SUV travelling to Port Harcourt from Abua in the Abua/Odual Local Government Area of Rivers State.

It was gathered that the passengers were approached by their abductors at the Rumuekpe junction along the East-West Road in the Emohua Local Government Area of the state.

An eyewitness, who spoke on condition of anonymity, told our correspondent that the gunmen came out from a nearby bush, shot into the air and took away the 10 passengers in the vehicle and the driver.

He said, “Some young men, early this morning, came out of the bush with guns at the Rumuekpe junction along the East-West Road in the Emohua Local Government Area and blocked a Toyota Sienna SUV conveying 10 passengers.

“They fired some gunshots into the air before kidnapping all the passengers in the vehicle as well as the driver. The victims were taken into the bush, while the vehicle was abandoned on the road.”

A driver, who plies the East-West Road, said the car that conveyed the abducted victims was still on the highway.

He stated, “The white Toyota Sienna, which conveyed the kidnapped persons, is abandoned on the road; I saw it first around 9am and by around 11am when I passed there again, I still saw it.

“I know the driver; we call him Star. After we heard about the incident, we have been running around calling his people as well as others who can help. I am praying for him and the passengers’ freedom too.”

When contacted, the Rivers State Police Public Relations Officer, Mr Nnamdi Omoni, said he had not been informed about the incident.

“I have not yet got information about this incident, but once I get the details, I will get back to you,” he stated.