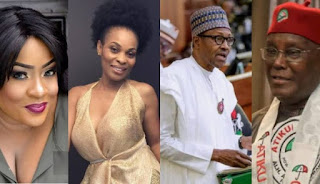 The dust from the just concluded 2019 Presidential election is yet to settle as Nigerians are not done having a debate over it.

The argument continued yesterday on Instagram as Nollywood actresses Foluke Daramola and Geogina Onuoha had a rift over their different political views.

The intense rift began when Geogina shared a  throwback video of APC National chairman, Adams Oshiomole, mistakenly using the word ”rigging” in place of ”defeat” during a press conference last year. Georgina shared the video and asked her followers if she heard right.

Foluke who is an APC supporter saw her post, was apparently irritated by it and cautioned Georgina to stop with the inciting post.

”What are u saying? Is that not a mistake? Besides did Buhari win in Edo? Pls @georginaonuoha stop all these incitements abeg just stop pls” Foluke wrote

In her reaction, Georgina wrote:”@folukedaramolasalako my darling, from the abundance of the heart, the mouth speaks. Too grave a mistake for a man who led the labor union for years. Given we all make mistakes or have slip of tongues, but to incorporate rigging? Nah.. nothing like “misspoke”. I wish Nigerians as a whole the very best. The level of our ignorance is palpable and perplexing. Actually, the TV responded this was during the Osun state election that involved the Adeleke’s.