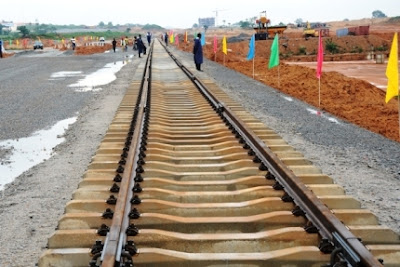 The federal government is offering free train ride for commuters on the Lagos-Abeokuta section of the Lagos-Ibadan standard gauge rail for two months with effect from Wednesday.

The free ride will be flagged off on that day by Vice President Yemi Osinbajo, Transportation Minister Rotimi Amaechi announced yesterday in Lagos.

Amaechi who was on a routine inspection of the project expressed satisfaction at the standard of work done by the contractor, the China Civil Engineering and Construction Company (CCECC).

He said two coaches would be deployed from Itakpe-Warri railway station to make four coaches which would run the free ride for two months.

His words: “I am impressed. The Vice-President will ride the train on February 6. He is coming to flag off the passengers’ use of the first phase from Lagos to Abeokuta which would reduce travel time from 1 hour 30 minutes to 45 minutes.”


The minister said that work was in progress on the various train stations within the numerous corridors.

He said efforts were being made to expedite work between Agbado and Apapa axis of the project.

“The level of work would have been faster in Lagos but due to some challenges of right of way in the city,” he added.

According to the minister, the rail project will further bring about economic development in the area and Nigeria when ready.

The minister inspected, among others, the Bolade-Oshodi, Iju-Fagba, Ijoko rail tracks to assess the laying of rail tracks on the axis

Fidet Okhiria, Managing Director, Nigerian Railway Corporation (NRC), had said that the track laying of the project was moving towards Lagos, adding that 1.5 kilometres tracks were laid everyday.

“Within seven days, the track laying will reach Iju towards Agege corridor of Lagos State.

“From here to Iju its 10 kilometres, and we are laying 1.5 kilometres on daily basis and by first week of February we will do a test run to Abeokuta from Lagos.

“All the formations have been put in place to expedite the tracks laying,” the NRC boss had said on Wednesday.

Jerry Oche, the NRC Lagos District Manager, said that the train, when completed, would be travelling by 150 kilometres per hour on the 156 kilometres Lagos – Ibadan trip in less than two hours.

“With the new standard gauge you can reside in Ibadan and be working in Lagos which is a very good development to people and for our economy,” he said.