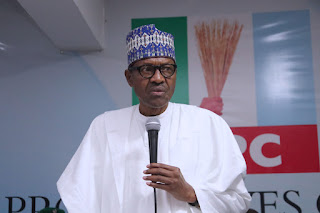 President Muhammadu Buhari courted controversy on Monday afternoon when he threatened that anyone engaged in ballot box snatching or other forms of electoral violence would do so “at the expense of his own life.”

The President said at the caucus meeting of the All Progressives Congress that he had given security agencies the order to “deal ruthlessly” with anyone seeking to disrupt the elections.

He said, “Anybody who decides to snatch ballot boxes or lead thugs to disturb it, maybe this is the last unlawful action you will take.

“I am going to warn anybody who thinks he has enough influence in his locality to lead a body of thugs or to disturb the voting system, he will do it at the expense of his own life.”

The Electoral Act (2010), however, does not prescribe death for any electoral offence.

Section 131. (1) states, “A person who- Threatening directly or indirectly, by himself or by another person on his behalf, makes use of or threatens to make use of any force, violence or restrain; (b) inflicts or threatens to inflict by himself or by any other person, any minor or serious injury, damage, harm or loss on or against a person in order to induce or compel that person to vote or refrain from voting, or on account of such person having voted or refrained from voting; or (c) by abduction, duress, or a fraudulent device or contrivance, impedes or prevents the free use of the vote by a voter or thereby compels, induces, or prevails on a voter to give or refrain from giving his vote, (d) by preventing any political aspirants from free use of the media, designated vehicles, mobilisation of political support and campaign at an election, commits an offence and is liable on conviction to a fine of N1,000, 000 or imprisonment for a term of three years.”